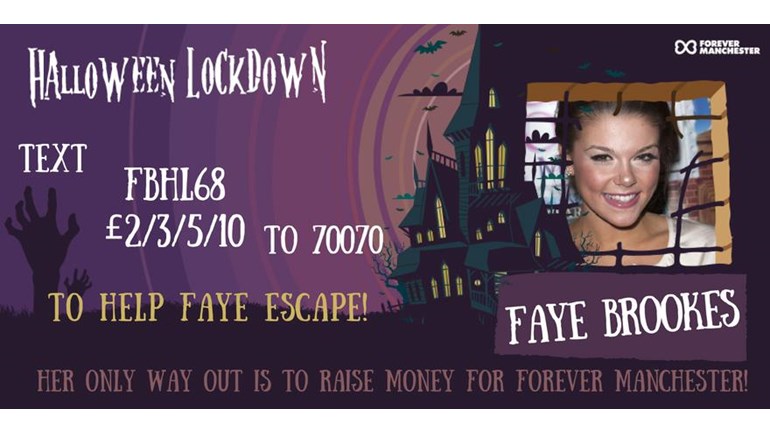 Help Faye get out of the haunted vaults on Halloween! DONATE NOW to get her out first.

Faye Brookes graduated Guildford School of Acting in 2009 after completing a BA Hons in Musical Theatre. Since then her theatre credits include:

Ann/Edna in That Day We Sang (Royal Exchange Manchester)

Liesl in The Sound of Music (Regent's Park)

She is currently know for playing Kate Connors in Coronation Street and has also has roles in BBC productions as Frankie in Our Zoo and Helena in Atlantis.

1. Do you believe in the paranormal?

Yes, even though the idea of it can be slightly terrifying.

2. Have you ever had a paranormal experience?

I have a wild imagination so growing up I definitely had experiences but whether they actually happened or I made them up are two different stories.

In every theatre I've worked in there has been some sort of ghost story. actors who have passed away and come back to haunt the last stage they performed on... I love all that.

Marry Frankenstein - I would make him worship me.

Avoid Freddie - That's my least favourite horror film, I don't like the mask.

A group of brave ghost hunters will gather in the bowels of Old Granada Studios on Saturday 29th October to expose the dastardly goings on of Manchester’s undead whilst simultaneously raising cash for Forever Mancheser. Their only way out is to get friends and family to raise as much cash as they can for Forever Manchester.

Depending on how much money is in each competitor’s JustGiving account – they will either be released and whisked off to Forever Manchester’s Halloween Spooktacular at Old Granada Studios to party the night away, or they will be locked up for even longer until the last man or woman standing is solo – spooky!

Forever Manchester is the only charity that raises money to fund and support community activity across Greater Manchester. We believe that everyone should have the opportunity to be happy and we'd love you to become part of this growing movement. ForeverManchester.com