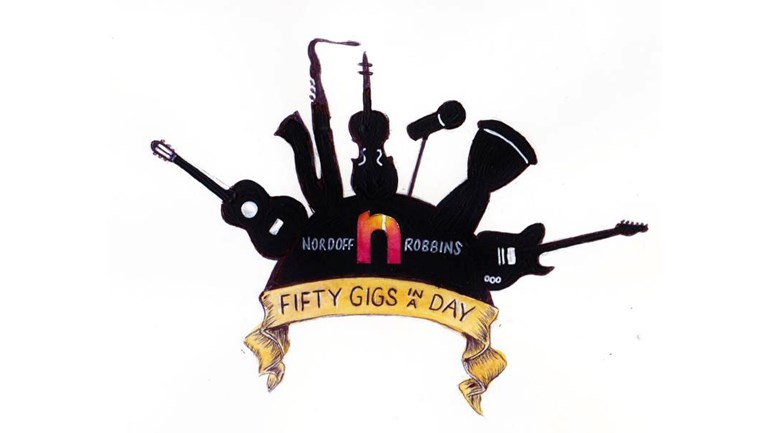 We use music therapy to change the lives of vulnerable people

For my fiftieth birthday this year (Feb 8th) I had fifty gigs/events (music, comedy, book readings) on that day (or near about) to plug the work of the Nordoff Robbinscharity. That was gigs already taking place, not me arranging fifty gigs! Most simply sent a Tweet and/or Facebook post on the day giving a link and plug to the charity, whilst some had leaflets from Nordoff Robbins on their merchandise stands. The idea being to create a whole host of gigs/events and social media posts mentioning Nordoff Robbins on and around the 8 February.

As it was such a success I thought why not make it an annual event to plug the Nordoff Robbins charity and their work in musical therapy which benefits people of all ages. Like this year’s event, the idea is to create a whole host of gigs/events and social media posts mentioning Nordoff Robbins on and around the 8 February 2019. Plus this year it will be hopefully 51 gigs and the focus this time will be on up and coming bands/artists/comedians/authors who may not be performing on or around the 8 February 2019, however they will be supporting and plugging the work of Nordoff Robbins.

From Ingrid Stone, Community Fundraiser at the Nordoff Robbins charity on this year’s Fifty Gigs…

Nordoff Robbins do lots of wonderful work helping people of all ages with musical therapy and music has always been a big part of my life.

ANDREW W.K. is the patron of Fifty Gigs In A Day 2019. His positive attitude to music is a perfect fit.

ADRIAN BELEW who has worked with the likes of Frank Zappa, David Bowie, Talking Heads and King Crimson, appears with his Power Trio at the Cruise to the Edge 4-9 February 2019

BROKEN WITT REBELS supporting Reef in Nov/Dec and their debut album is released on November 24 via Snakefarm Records.

DANDELION CHARM will be playing a gig in support of Nordoff Robbins at the Brunswick, Hove on Feb 8

JARROD DICKENSON, the well dressed singer songwriter, will be playing Birmingham on February 8

BARBARA DICKSON who plays a show at Eden Court, Inverness on Feb 8

LITTLE RED KINGS are planning to be playing live TBA on or around the 8 February next year.

LOST VOICE GUY winner of this year’s ‘Britain’s Got Talent’, will be performing at the Palace Theatre, Southend on February 8

THE SMYTHS play in Adelaide on Feb 8

THOSE DAMN CROWS the band will be kindly donating signed merchandise for an eBay auction nearer the time, plus they support STONE BROKEN at Unit 51 in Aberdeen on February 8

Nordoff Robbins is the leading independent music therapy charity in the UK, dedicated to changing the lives of vulnerable and isolated people. We support thousands of people through our own centres and by working in partnership with a wide range of organisations.

Charity Registration No. 280960
Find out more about charity fundraising