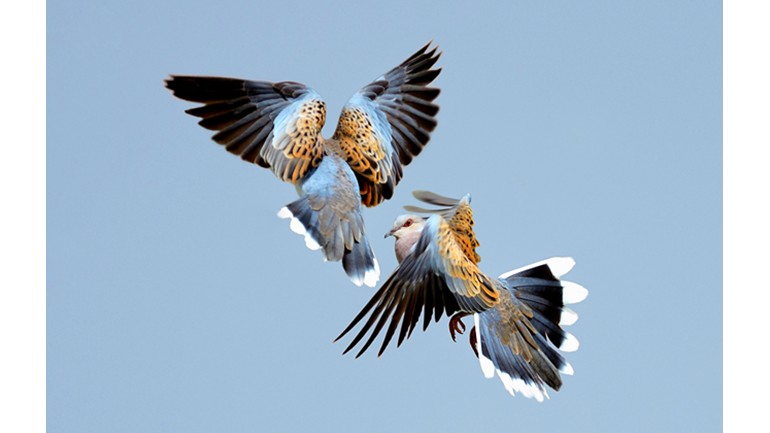 Please support BirdLife's vital Keeping the Flyway Safe appeal, and join BirdLife International in tackling the illegal killing of birds in the Mediterranean.

We have conducted a comprehensive new scientific study in 26 countries throughout the region which has discovered that despite legal protection, illegal bird killing is taking place at quite extraordinary and unsustainable levels.

We have identified three individual blackspots – the Famagusta area in Cyprus, the Manzala area in Egypt and the Akkar area in Lebanon – where, staggeringly, more than half a million birds are being illegally slaughtered each year.

Populations of 40 different migratory passerines that were once more abundant in Europe are declining and some are now in free-fall. Many have already disappeared from much of their former range.

European Turtle–doves have declined by 30% throughout Europe since the millennium and in some countries by as much as 90% in the same period. Yet more than one million are still illegally killed each year.

Our birds are begging for a safer flyway. Help us stop the illegal slaughter, to restore nature’s natural rhythm and let migrating birds fly freely once more.

To tackle these threats, our direct conservation efforts need to be stepped up at the blackspots we have identified, coupled with effective and well-coordinated local, national and regional advocacy.

You can help us make the flyway much safer. One of our regular supporters has offered to match any donations we receive. For every £50 you give to the appeal we can now secure £25 more. To be sure of triggering this support we need to raise £75,000 by September 30th.

Please donate now so we can access this vital uplift to our work.

Please help us Keep the Flyway Safe by supporting our appeal and together we will win the battle to protect migrating birds so they can fly freely once more, travel to and from their breeding grounds unhindered, and restore the balance of nature as it was always meant to be.

Thank you for your passion and commitment.