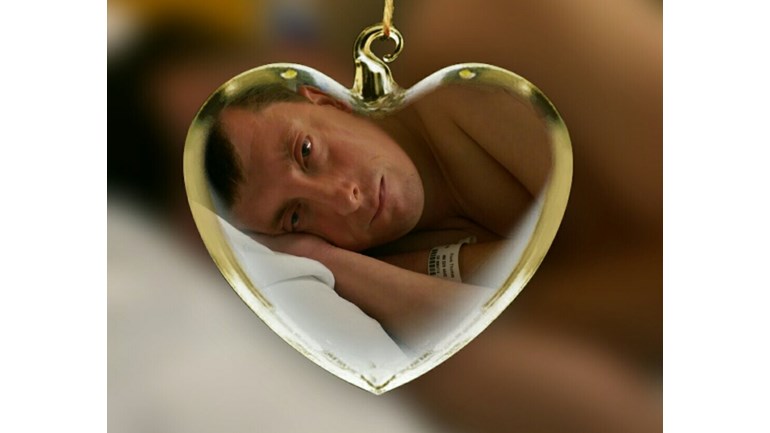 I am raising money for Checkemlads.com Testicular Cancer Awareness and Support because I want to raise awareness of this awful disease.

We provide support and push awareness to Men and their loved ones across the UK.

"Someone I love has gone away,

And life is not the same.

The greatest gift that you can give

Is just to speak their name.

I need to hear the stories

And the tales of days gone past.

I need for you to understand

These memories must last.

Since they're no longer here.

So when you speak of them to me

Frank was born on the 18th January 1985 in Exeter. He was five weeks premature, and was diagnosed with Pierre Robin Syndrome. He found life difficult right from the start. Later on he was labelled with Asperger Syndrome too.

Despite these drawbacks, he was an amazing young person, with a kind personality, a complex character, a huge knowledge of trivia, an astounding vocabulary and a wicked sense of humour.

He loved to travel the world with us. Whether it was sailing around Tobago, Bermuda or the Virgin Islands. Swimming with dolphins in the Florida Keys. Holidaying in Corfu, Switzerland, Hong Kong or Singapore. Snorkelling on the Barrier Reef or walking the sands of Magnetic Island or Bondi Beach. Rainforests and the snowy Australian Alps. And of course he loved America. From Chicago to Key West, Charleston to Daytona. Hilton Head and North Myrtle Beach were places he'd come to know very well. But it was in Orlando that he really had fun. The theme parks excited him so much, with their amazing variety of white knuckle rides. He loved Universal Studios, The Islands of Adventure, Sea World, Aquatica, The Magic Kingdom and DisneyWorld, Busch Gardens, Typhoon Lagoon; the list goes on and on.

As a family we were all in Florida for the turning of the millennium. We drove to Cocoa Beach, were sitting on the sand at 5am on New Year's Day as the sun rose on the first day of the year 2000. An awe-inspiring experience.

Frank's schooling was sometimes difficult, as he needed much extra help, but he made so many friends along the way. He really was such an individual character. He spent two years at school in Australia, then when we returned home he went to St. Ives Juniors. At sixteen he went on to complete a three year course: Further Education Through Horsemanship, and stayed in the New Forest at a wonderful facility called the Fortune Centre. For the next ten years he spent time at Palace Farm in Devon, coming home throughout the year for weekends and longer holidays. There he continued with his horse riding, helped out in charity shops and had an assisted placement at a children's nursery. He loved looking after the younger ones.

Frank was an avid reader and was rarely without one of his books. From He-Man and She-Ra, Thomas the Tank Engine, Star Trek or any Enid Blyton, to Greek legends and Indian mythology, the history of the native American people, to Homer's Iliad, or the Three Musketeers by Alexandre Dumas. He loved the written word.

In his late teens he was taken to Lourdes, in France by the HCPT, to visit the shrine of Saint Bernadette. He went with a group of children with special needs, organised by the Royal Navy. To all accounts he had a wonderful time, even drinking his souvenir bottles of holy water in the hope of making him better, more normal.

St. Ives was his home, and he felt safe here. He would wander around visiting the bookstores and charity shops. Walking across the beaches and through the streets.

It was in September 2014, soon after we'd returned from our summer holiday in America, that he first went to hospital, complaining of a pain in his testicle. In October, following a biopsy, all was reported as being ok. But cancerous cells had been found, so a week later he had his testicle removed. And so we thought that was it. But during November he continued to have headaches and vomiting, and at the end of the month, he was found to have a brain tumour and further tumours in his lungs.

We were so scared and shocked. His 100 days of chemotherapy began on December 3rd. Sometimes there would be day case infusions, sometimes he would have to remain in hospital for six days at a time. Both my husband and I took it in turns to stay with him. He lost weight, and also his hair. He bore his treatment bravely, and half way through we were told the tumour in his brain had shrunk markedly. He was in hospital for Christmas morning and also for his 30th birthday. By the end of February he developed peripheral neuropathy, and found it hard to walk. He began to lose his appetite, and on two occasions had blood transfusions to boost him up.

Frank was not like other thirty year old men. He depended on us totally. He did not go off to college or university. He didn't have a girlfriend, lover or wife. In the last few months he was our shadow. Everywhere we went, he came along too. Our constant companion. There was a comforting routine to his life. We looked after him, and he was protected in his own little world.

And then that fateful day came: Thursday 12th March 2015.

It was the day before he was due to end his chemotherapy treatment.

I leave for work early, and my husband follows soon after with Frank, to drive to Bristol to pick up our younger son, returning home from Spain.

They text me throughout the day to update their progress.

I end the school day with a Year 10 parents evening, so do not arrive home until 5:30pm.

The boys get back home soon after seven. It's been a good day out, but everyone is a bit tired. Frank even says that he has really enjoyed today, seeing his brother.

Our younger son goes back to his flat, and Frank decides to take himself to our bed for a little sleep, until we are ready to go to bed. He liked his cuddles.

He says he is tired, and doesn't really want to eat.

I watch a bit of television, then round about ten o'clock I get his night time medication ready.

Going into the bedroom, I see him lying on his tummy, as usual, snuggled under the duvet.

I call to him.

I pull the covers back a bit, and he feels warm, but he is face down.

I pull his shoulder around and notice one side of his face looks a bit bluey purple.

He is not breathing.

I shout to my husband.

I pull him right over on his back.

I start mouth to mouth.

Back to mouth to mouth.

The operator on the end of the phone tells me to put my son on the floor.

Keep going with the chest compressions.

He counts with me.

The ambulances are on the way.

I keep counting with the chest compressions.

The first paramedic arrives, and tells me to keep going with the chest compressions.

He sets up the defibrillator.

My husband takes over the chest compressions.

A tube is put down Frank's throat, and fluid is sucked out.

His lungs are filling up, because he is not breathing.

Two more paramedics arrive, and take over from me and my husband.

They keep on with the chest compressions.

Three shots of adrenaline are pumped to his heart via the chest line.

Our son is slipping away.

There is nothing more they can do.

I tried so very hard to save him. I really did.

Our younger son arrived back at our house at this point.

He is utterly heartbroken.

A policeman comes into the house soon after.

Because it is an unexplained death, there are procedures to follow, and questions to answer.

Frank is soon carefully lifted off the floor, and gently placed in his own bed.

I cover him with his duvet to keep him warm.

I hold his little hand tightly in mine.

I try to keep him warm, but his face is now really cold.

I stroke his cheeks and kiss him.

The colour has drained away.

I go and get his hat.

He always slept wearing one on his head.

The back of his neck is still warm, as I pull the hat over his hairless head.

My husband comes and sits with me as we look upon his tiny, still face. His brother comes in to say goodbye, as do my sister and her husband.

We cannot comprehend what has happened.

I talk to him.

Telling him to wake up.

Willing him to return.

Wanting him to hold me.

Pleading for him to open his eyes.

I'm still holding his hand, trying to keep him warm.

His small little body could take no more, and his tiny heart stopped beating.

I know there are two men waiting outside to take him away.

They suggest I leave the room.

I want to see that he is looked after.

And they do treat him with the utmost dignity and respect.

Making sure he is still wearing his hat.

They open a white body bag on the floor and carefully place Frank inside.

I hold his hand for as long as I can.

Slowly the zip is closed over him, and then he is gently lifted onto a stretcher and strapped in place.

Another cover is pulled over, and then he is taken downstairs.

We all walk outside as he is put in the coroner's van.

I touch his body again and say goodbye, goodnight.

He is driven away just after half past one in the morning.

I can feel him in the house with us.

When we do eventually go to bed, we put his dressing gown between us.

We try to hold onto him.

To keep him close.

Fly free with the angels, Frank.

Our son, our child, our baby.

We miss you so very, very much.

We love you with all our hearts.

To the moon and back.

And all the world.

An Angel in Heaven.

Award winning Checkemlads is run by male cancer survivors and soldiers who help men and their loved ones going through testicular cancer, with support, friendship and advice. We also raise awareness in schools and work places and British Army bases. est 2003 check out our website checkemlads.com