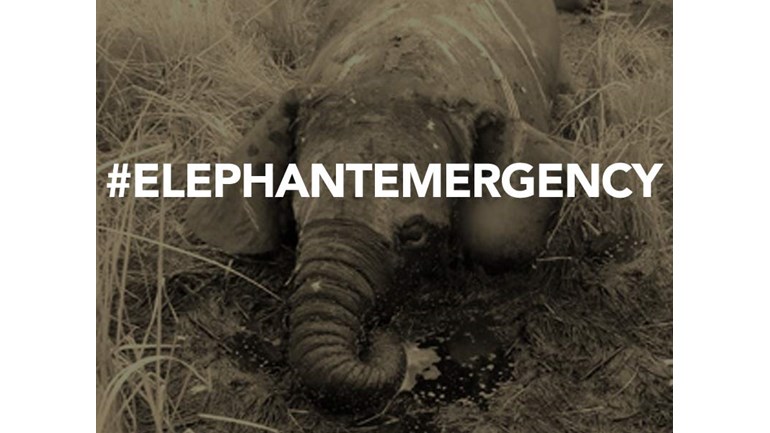 Asking you to act now and make a donation for Fauna & Flora International because the elephants of Garamba need our help today.

Thank you to everyone who supported our elephant emergency campaign, this page is now closed.

Every donation made to this cause was matched by our sponsors; so every contribution made twice as much difference.

Poachers are able to wipe out whole herds in a single attack – unless you help us stop them.

If we don’t prevent this from happening them we may lose Garamba's elephants forever.

Following this unprecedented spike in poaching we are asking you to take action to help protect these irreplaceable elephant herds.

Earlier this year Garamba National Park hit the headlines internationally due to a startling and highly militarised poaching crisis in the park.

A herd of ten elephants were decimated by poachers who used a helicopter and advanced weaponry in the attack.

The park has long suffered poaching spates from armed militias but the scale of this crisis is unprecedented. The poachers are highly equipped and non-discriminatory, having killed the entire herd.

Since May, two helicopters have been spotted hovering low over the park and a further herd of 15 elephants has been lost.

This is devastating news because Garamba’s elephants have a unique genetic footprint, found nowhere else on earth.

Unfortunately, despite their dedication, without adequate resources rangers are hopeless in the face of highly militarised poaching.

Why is money needed now?

This new military style ‘method’ of poaching is completely unsustainable.

Rangers on the ground need immediate funding to step up efforts halt the poaching activity, as once the herds are lost, they cannot be brought back.

Since June, the Rapid Response Facility (RRF) has provided emergency stop-gap finance to increase protection of the park but, more is needed.

We need enough funds to get more rangers out in the park, defending one of Africa’s last bastions for wildlife.

Money is needed at this critical time to ensure the survival of these amazing animals in the park.

We want to tackle the problem NOW while it is still manageable and before Garamba’s great herds are lost for good.

Add your voice to the campaign by using the hashtag #ElephantEmergency

A few examples of how your support can help include:

£5 could purchase two signalling devices to keep rangers in touch with helicopter teams.£20 could provide rations for one ranger team on a ten day patrol.£100 could fund one vehicle patrol in Garamba National Park£600 could sponsor one aerial patrol in the park

By donating today, you can help save the gentle giants of Africa.

Thank you for your help.

This is an appeal from the Rapid Response Facility (http://www.rapid-response.org);  – an emergency grant fund managed by Fauna & Flora International.