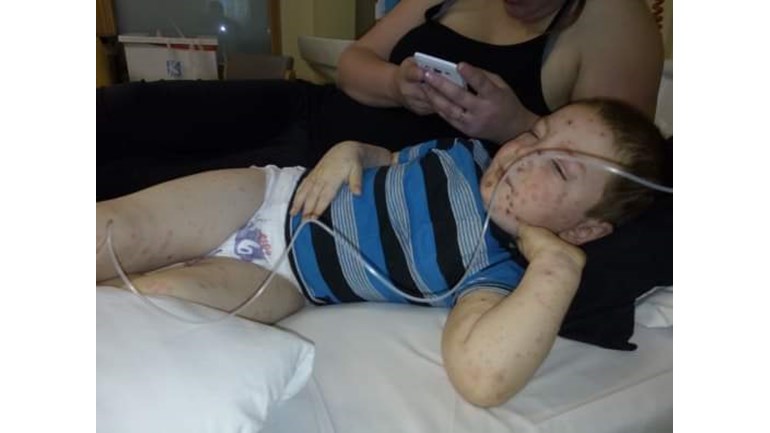 Regular guy giving back to wonderful people for CLIC Sargent because Wonderful support whenever we need it!

Jack has always been a very happy boy, smiling and winning the hearts of everyone he meets. He is polite and a wonderful big brother to his very young brother (only born in March 2018!). Throughout his struggle, he has remained strong and happy - a credit to our families who support us no matter what.

In April of 2018, Jack was taken into our local hospital (West Suffolk) for a severe case of chicken pox, after 3 days of not eating, drinking, suffering delirium, and multiple failed cannulas, we were told that he had Acute Lymphoblastic Leukaemia (ALL) a cancer of the blood that affects the body’s ability to grow healthy cells. We were immediately transferred to Addenbrookes via blue light and were given treatment over the course of the next few weeks.

This was extremely traumatic and nearly broke myself and my wife mentally. While we cried at night, Jack remained strong and managed to get into remission after the first couple of months. The treatment for ALL was gruelling for the first 6 months. Jack suffered throughout with a smile on his face ever determined to be the happy boy everyone can’t help falling for.

Although Jack has an active Hickman Line in his chest to allow chemotherapy drugs and drips to be inserted without having to have needles and cannulas, in August of 2018, I was called from work by my hysteric wife saying that his Hickman line had fallen out during a blood transfusion. Jack was covered in blood and doctors couldn’t tell how much was his and how much was the transfusion blood. A new Hickman line had to be inserted – something we were told that would last for the full 3 ½ years of treatment and most people wouldn’t need to worry about.

After 6 months of horrendous treatment, we were told that the treatment would calm down but we would have to have regular nurse visits and blood samples taken to check his blood was within a healthy limit and to check for Neutropenia – when your body cannot fight infections. When Neutropenic, we keep Jack away from crowds and are extremely wary around anyone who is sick. This means he is unable to enjoy the type of life you would typically expect for a young boy.

Despite being out of the worst period of illness, Jack’s treatment will last until the end of July 2021. Even after the 6 month period, Jack has had to suffer more hospitalisation when infections set in and he is unable to fight them off.

Both myself and my wife are extremely grateful to everyone who we have had contact with – At West Suffolk Hospital, Addenbrookes, District Nurses, Our GPs and everyone at Clic Sargent who have had an immeasurable positive impact on our lives and helped us understand, cope and move forward.

My decision to attempt to raise money for Clic Sargent started early. My hope is that Clic Sergeant will be able to give the type of support they gave to us to as many families as possible whilst they are suffering some of the worst times in their lives.

On the 18th June 2019, myself and three friends will make the climb up the Pyg Track to the summit of Snowdon. I have attempted this once and it is a monumental effort for myself (I'm not the fittest!). At an elevated climb of 700m and 5.5Km length it's more than I would choose to do normally. apparently we will burn on average 3000 calories per person.

My reason for this is attempting to simulate as closely as I can to the type of pain and resilience that Jack has to show every day. I can only thanks my Friends for supporting me and Jack - they may be carrying me by the end!!! Come rain, sleet or snow we will finish.

Thank you for reading