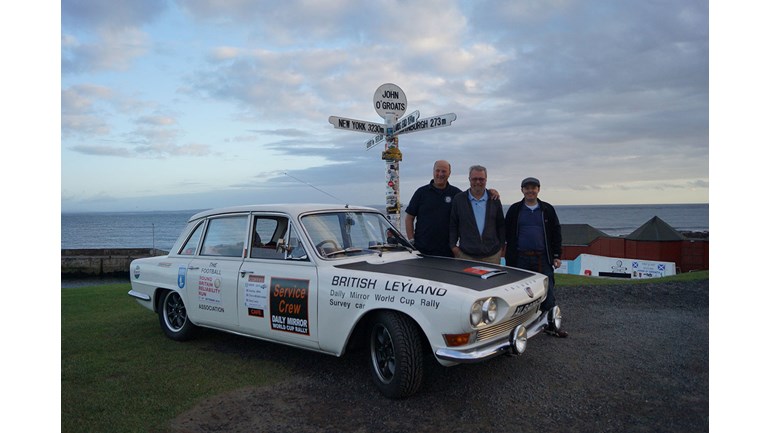 The 2018 RBRR will be the 26th in the series that started in 1966, it was then run in 1969, 1971, and 1974, then being run every two years.
1973 was missed out owing to the fuel crisis of that year.It is
considered to be one of the longest standing one make car events held in the world and has earned plaudits throughout the old car motoring world. Interesting fact , when first run in 1966, the cars were all new vehicles, now the minimum age is 35 years!

Since 1990 the event has had a charitable basis and has raised over
£607,000.00 for various UK charities, last time in 2016 the event
raised £97,000.00 for Guide Dogs. For this time, Club
Triumph want to raise a sum of over £70.000, however it would be
great to raise £90,000.00 and therefore push the grand total of
raising over £607.000! Please support Epilepsy Research by making a pledge using Just Giving. Your details are safe with JustGiving – they’ll never sell them on or send unwanted emails. Once you donate, they’ll send your money directly to the charity. So it’s the most efficient way to donate,saving time and cutting costs for the charity.

It is a tiring event but with some great driving roads, beautiful scenery, good company and lots of chat at the stops. It gives the old cars a great opportunity to show what they can do.

So we hope that you will wish us well, a safe trip and also help our team and Club Triumph make another significant contribution to one of the UK's very deserving charities.


Epilepsy Research UK supports and promotes basic and clinical scientific research into the causes, treatments and prevention of epilepsy. We are the only national charity in the UK that is exclusively dedicated to funding independent research into this condition. Epilepsy Research UK was formed following the merger of the Epilepsy Research Foundation and the Fund for Epilepsy, in April 2007.
Epilepsy Research UK supports the work of scientists and clinicians throughout the UK, who are investigating all aspects of epilepsy in both adults and children. They are especially looking at what causes epilepsy, who is at risk of developing it, what goes on in the brain during a seizure , and safer drugs and better surgical techniques to treat it.

For more information on the
Round Britain Reliability Run go to www.club.triumph.org.uk and click on the events page.