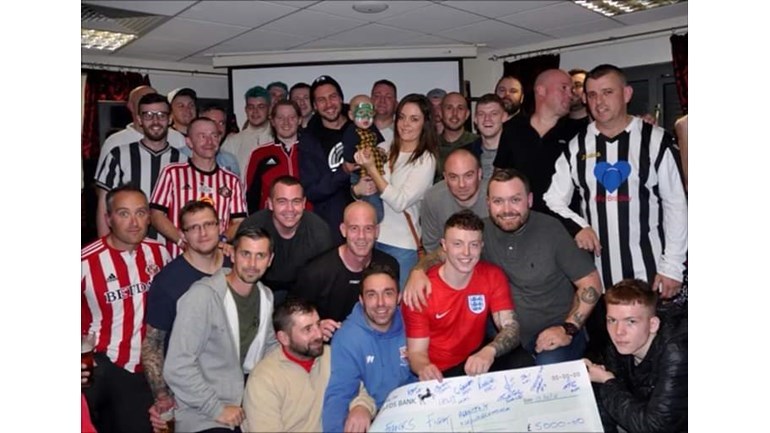 We help raise funds for children to receive medical treatment/equipment

The Bradley Lowery foundation has been set up to help families who need to fund raise for treatment or equipment, not available on the NHS. We will support families through their fundraising campaign in order to help achieve their targets. We offer not only support, but grants where eligible.

This will be our third annual football match originally thought of by a Geordie (Gareth Horsley) who called a Mackem (David Bygate-Pittiglio) and said are we gonna do this now after the SAD loss of Bradley Lowery. It’s something we wanted to do while Brad was here but not taking the chance we decided that it was fitting that we moved forward in his memory supporting his Foundation which is ran by a dedicated team of people headed up by Brads Mam and Dad Gemma and Karl and Lynn Murphy.

We have been very lucky and thanks to a great group of lads who got right behind the idea and a lot of people who have supported us this event has gone from strength to strength.

Our first match in December 2017 was a 3-3 draw at full time which went to penalties and the Mackem lads came out victorious. This was an 7 a side game and raised almost £7000!!! Due to the success of this game and the demand for people to take part we decided that in October 2018 we would move to 11 a side.

The success of 2017 attracted the imagination of many people and 2018 saw us starting our fundraising targets at £1800 thanks to some Great NE companies who became our event sponsors.

So 2018’s game saw the Geordies gain some retribution as they ran out 7-3 winners after a fantastic second half display after the teams had gone in level at the break.

Thanks to the support of our above named sponsors, Rutherford fc who supplied us with great facilities (pitch and the clubhouse, changing rooms and bar), many local people including our friends and family who attended and contributed heavily through donations and many people we had the pleasure of meeting who supplied entertainment for all of which included a magician a face painter a photo booth and a disco. Thankyou to Horsley ladies for supplying a  lovely buffet enjoyed by all and very much appreciated by all who attended.  All of these things above contributing  to a MASSIVE £12,000 raised in 2018!!

This year we set out again as last year attempting to break the £10,000 barrier. This year it’s the Mackems who will play host to the event at Nissan Sports and Social club.

The date for this years event is Saturday the 27th July

Charity Registration No. 1174333
Find out more about charity fundraising