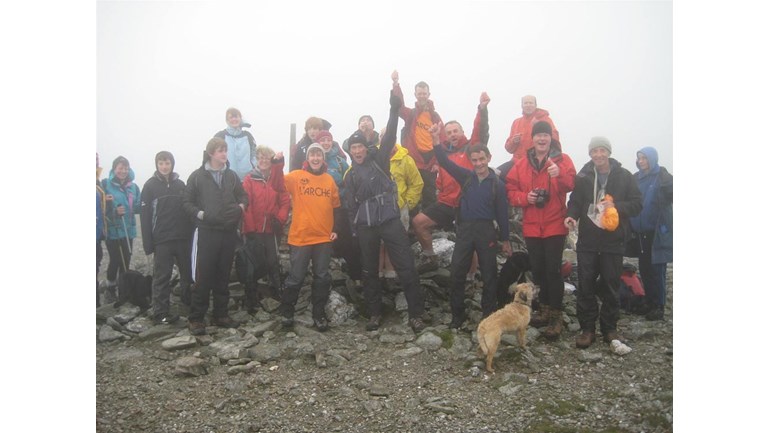 L'Arche builds communities with people who have learning disabilities. Together with assistants, they live in ordinary houses, with choice in and access to work, therapy and local resources. The nine L'Arche communities in England, Scotland and Wales are founded on Christian values, also welcoming people of other faiths and none.

"GRANDAD'S MAD MUNRO MARATHON" (So called by my son in law describing it to his 2 year old daughter - he's a doctor specialising in the Care of the Elderly, so he should know!)

6.7.'10 Well that’s it! After 88 days walking and 14 months of training and planning, I’ve got over the finishing line. I could not have found the motivation to get round in under 3 months without the backing you all gave me. It has truly been a community effort. THANK YOU. Generally it was tougher than I had expected, particularly the final 26 days when I pushed to the finish, without a break. Much good fortune went with me, allowing me not to lose a single day through injury or ill health. There were some “near things”. Twice in remote locations, with help dangerously far away, I was close to being seriously injured. So, one challenge is over but the bigger and much more important challenge remains: to reach my target of £50,000 towards two specific projects for a beautiful charity in memory of a very wonderful and greatly missed friend. I talked to David a lot on my trip, particularly as I sat alone on Sgurr Mor (Loch Quoich) were we finished our round of the Munros together in 1996. Wouldn’t it be wonderful if he’s watching and listening. Further information: www.dglmf.wordpress.com for all Fund details and walk "blog", www.larche-edinburgh.org.uk/ for information about L'Arche. Gerry can be contacted at gerrymcpartlin@aol.com, 01520 744454 (home) or 07900 471056 (mobile).   I was was Father David’s GP and close friend for many years. We climbed together on numerous Munros as well as in the Alps and in the Himalaya. We completed our rounds of the Munros together in 1996, in a group of five which is still the largest group known to have completed the Munros at the same time.

So, It seemed that the most suitable way in which I could raise money for the "David Gemmell Living Memorial Fund" was through a sponsored second round of all the Munros. Typically it takes over ten years to do all the Munros but I am attempting to do it in under 4 months, if possible, in under 100 days, starting on Ben Lomond on 10 April. If I succeed, it is likely that this will be the fastest Munro round by a pensioner!

The fund is to be used for 2 purposes: to help establish the new L'Arche community and home at Nyahururu, in Kenya, and to help finance a third L’ Arche home in Edinburgh, to be named in Father David's memory, so as to provide a tangible and enduring memorial to Father David that will be of real benefit to adults with learning difficulties.

L'Arche builds communities with people who have learning disabilities. Together with assistants, they live in ordinary houses, with choice in and access to work, therapy and local resources. The nine L'Arche communities in England, Scotland and Wales are founded on Christian values, also welcoming people of other faiths and none.