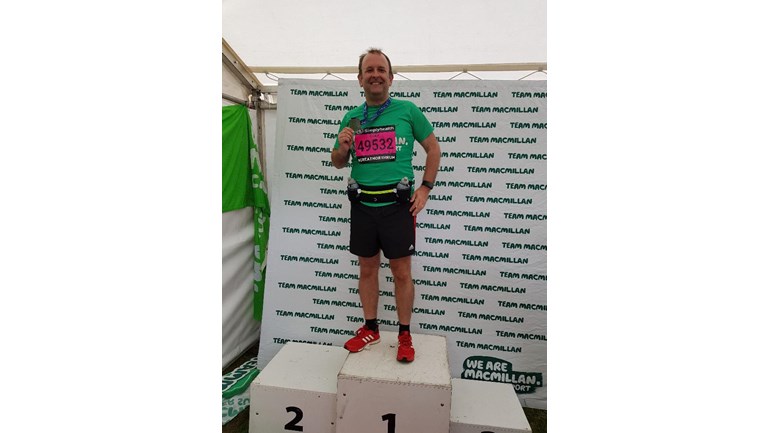 I am running the Great North Run for Macmillan Cancer Support because they provided outstanding support for my Dad.

Over twenty years ago I sat with my Dad, John Feechan, as he died of lung cancer at 57 years old. He was, and still is, a huge inspiration to me.

In his dying weeks and months, a wonderful MacMillan nurse named Teri kept visiting and made the process as comfortable as it could be for my Dad and Mam.

When he died I made a promise to myself to challenge myself to run the Great North Run and raise money for MacMillan.

Over the years, life, and a few stones of excess weight, got in the way of that promise. The picture above was me last September and I'd never done any running for about twenty years.

Finally, in January of this year, I decided that I was going to finally do it - and in the process, stop accepting my unhealthy lifestyle. I entered the Great North Run (and got accepted), contacted MacMillan, and entered the 5k Go Dad Run for April and the  Great North 10k for July, to keep me motivated!

I started walking and dieting through January and February because I wanted to get some weight off before I started running - for the sake of my knees.

Unfortunately, I had to have a hernia operation on 13th June and the running had to stop.

After 5 weeks I was finally given the go-ahead to start again on 17th June and did my first run since the operation yesterday  (18th June) . There was no pain from the operation but the 5 weeks without exercise  and an extra 6 pounds were very evident. However I managed two miles and I'm on my way again.

Please give what you can for the wonderful work that MacMillan do, and to keep me on the track to healthy life!

Thanks for taking the time to visit my JustGiving page. Fundraising is hugely important to Macmillan. Without people doing events, running marathons, climbing mountains, and donating in all the other ways that you can, Macmillan wouldn’t exist.Donating through JustGiving is simple, fast and totally secure. Your details are safe with JustGiving - they'll never sell them on or send unwanted emails. Once you donate, they'll send your money directly to the charity. So it's the most efficient way to donate - saving time and cutting costs.