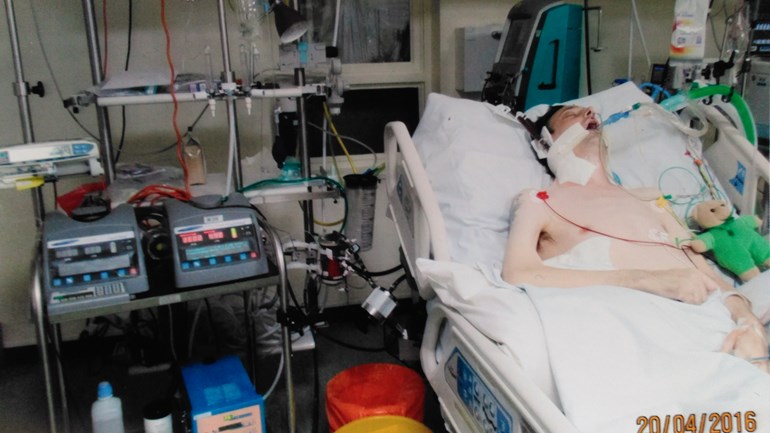 We are cycling to Leicester Glenfield Hospital for Leicester Hospitals Charity because WE CAN! Thanks to ECMO.... I can too.

ECMO stands for extracorporeal membrane oxygenation. The ECMO machine is similar to a heart-lung bypass machine used in open heart surgery.
ECMO pumps and oxygenates the blood outside of the body allowing the heart and lungs to rest. Blood flows through tubing to an artificial lung in the machine that adds oxygen and takes out carbon dioxide. The blood is then warmed to body temperature and pumped back into the body.
At 20:30 on the 14th April 2016 the Leicester ECMO Team left Glenfield Hospital and travelled to Bedford intensive care to carry out the most vital and life saving procedure I could have ever asked for.
My family were all waiting anxiously for Dr Harvey and his team- when they arrived there was finally hope.
To give you a brief summary of the events leading to my travel to Glenfield that night, I had been on a ventilator in Bedford Hospital since the early hours of that morning resulting in my body being supplied 100% oxygen . Basically, my lungs were failing and fast. I had already had a heart attack and stroke while in the hospital and my body was very vulnerable.
Things were not looking good. My blood pressure was becoming very low due to the 'unknown infection' and I was requiring increasing medicines to keep my blood pressure up.
By 23:15 on the 14th April 2016 I was successfully on the ECMO machine and in Glenfield by 01:30 on 15th April.
I remained on ECMO until 21st of April, my now 2nd Birthday!
Of course, it wasn't so simple. I was also on Dialysis for my kidneys and received Plasmapheresis which cleared my body of the antibodies that were making me so unwell. We now know this condition to be Vasculitis and thanks to the knowledge of Dr Harvey and his team for the diagnosis.
This revolutionary equipment together with the ECMO specialists gave my body the survival kit to move into intensive care, eventually off of the ventilator, plasma exchange and dialysis and finally home.
I am one lucky guy!
But this isn't all about me. It's about the ECMO departments and specialist teams that are under threat of cuts and closure in the UK. Those very teams that not only save lives but do it with such passion, such knowledge and give so much hope and chances to families around the UK and the world. These ECMO Doctors and Nurses do far more that just operate, they go further with their care than I could ever describe. Of the many ECMO groups, patients & their families alike would agree that without ECMO there would not be the hope or chance of survival.

We desperately want to prevent ﻿ any threat of Glenfield losing their ECMO facilities; for adults or children. We know only too well how grateful we all are to those who saved my life, and are sure that each survivor and their families feel the same as us.
By raising funds for Glenfield, Leicester Hospital Trust we hope that our cycle challenge can contribute (albeit a small gesture) towards saving more lives.
Two years on and I feel able to build my strength enough to make that journey from Bedford to Glenfield without the need of the ambulance!

The team will be leaving Bedford Hospital on 20th May 2018, cycling to Glenfield, the anniversary of finally returning home after 3 months in hospital.

Thanks for visiting our page. If you can donate £1 or more to JustGiving via this page, we are on our way to our target of £5000
The DONATE Button can be found at the top of this page.


If you would like to find out more about the work of Glenfield Hospital ECMO visit www.leicestershospitals.nhs.uk/aboutus/departments-services/heart-services/ecmo﻿

Charity Registration No. 1056804
Find out more about charity fundraising