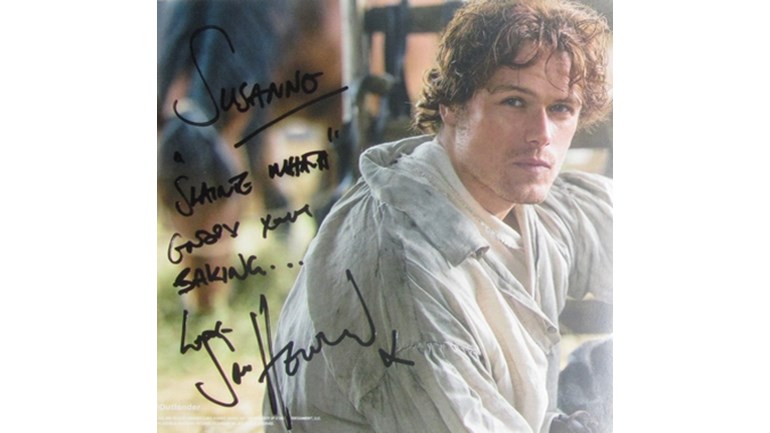 Instead of Awards and Nominations...

I tried to raise $12.800 until the Golden Globes for Bloodwise (formerly Leukaemia and Lymphoma Research) because Sam Heughan was snubbed, but he's still our #1 :-)

Update: I will keep this page and this story online for a while longer, to keep the lovely comments alive. But I consider the fundraising as itself closed, because the Golden Globes is over as well.

If you still want to support Sam's chosen charity , maybe donate to Bloodwise UK directly? Thank you once again for all your support! xoxoxo
How and why it all began....
When the HFPA announced the Golden Globes 2016 nominations and Sam Heughan was not among them, I admit for a few moments I was disappointed - and let's be frank, pretty pissed off - on his behalf for that oversight. Instead of dwelling on these emotions for too long though, I was wondering how we fans could show Sam that we definitely appreciate and value his stellar performance in season 1, even if the HFPA doesn't (yet). And then I thought, why not channel some of these negative feelings into something more positive and do a bit of good as well as show Sam that we support him?
I set this page up on a whim, with no experience in fundraising and definitely no idea how or if to let know Sam about this, during or after the fundraiser. I've now been reading all these wonderful messages to Sam here and will try my best to make sure he will read them too. I just haven't quite figured out how to manage that!

Manufacturing a Golden Globe statuette seems to cost about $800 and that was the initial goal for this fundraiser, which was reached in less than half a day! A new goal of $2016 (as it was the GG of that year) was reached almost as quickly. So I decided to be bold and raise the goal to the equivalent of one Golden Globe for each episode = 16 x $800 = $12.800, because Sam did amazing work in all 16 episodes.

I was thrilled, happy and completely over the moon to see the nominations for Caitriona Balfe, Tobias Menzies and especially the show itself. And even if they didn't win, the nomination itself was such a milestone for season 1.