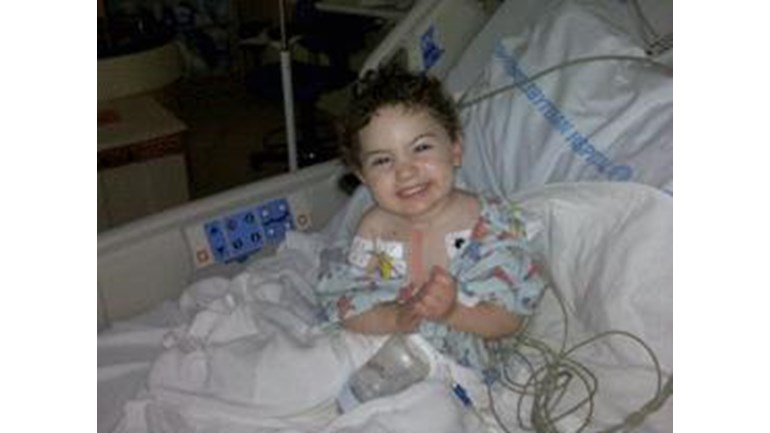 We fund research and support families to access clinical trials for children.

‘’6 years later, Grace is progressing very well and living as near normal a life as possible, you would not know from looking at her that she had ever been sick.

She recently started playing hockey in school and is a regular tennis player, drama is an area where Grace performs very well and at the end of last year recorded the highest marks for LAMDA in the school (this included years 1- 6).

Grace is very musical, plays the harp and sings in the choir. Her school work is also at the required standard for her age. Grace has regular check-ups every 3 to 6 months but there is nothing of concern to-date.  She takes a daily injection of a growth hormone as it was found that her levels were low. Other than that she does not need to take any medication.‘’

Grace was diagnosed with stage 4 neuroblastoma in October 2007 and her parents opted for her to be taken to the Memorial Sloan Kettering Hospital (MSKCC) in New York for surgery & Monoclonal Antibody Treatment- with an 80% survival possibility. Grace and her family moved in the first week in January and she underwent her first surgery within a fortnight. Grace relapsed with a tumour in the brain area and underwent surgery on the 12th September 2008, she was then treated with radiation and 8H9 antibody at Memorial Sloan Kettering in NY. Since the 12th of September 2008 Grace has been clear and is due again to repeat all her tests at the end of August 2009.

Grace repeated all her tests again in November 2009 and continues to be cancer free. MSKCC are delighted with her progress and have removed the access port from her chest as no further treatment is planned.

All donations are paid into Solving Kids' Cancer's general funds to further its general charitable purposes. The funds raised by this Journey are not restricted for the child's use. However, the trustees of Solving Kids' Cancer have agreed to designate funds raised by this Journey to help the child and their family pay for potential future treatment costs and all other associated costs including travel and accommodation. If the child no longer needs the funds, or if the trustees decide, at their absolute discretion, that the funds should be used for a different purpose, they may redesignate all or part of the funds for Solving Kids' Cancer's general charitable purposes. We are very grateful for your charitable donation.

For further information about Solving Kids' Cancer and how we spend donations, please see our FAQs.