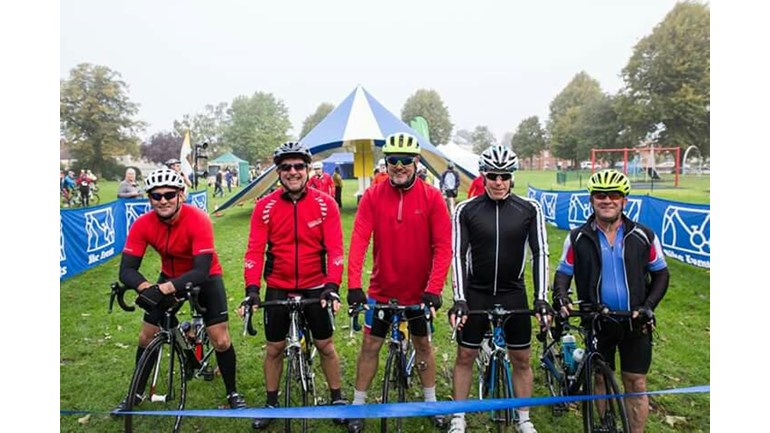 We hope to raise a lot of money for the North Wiltshire Group of the Motor Neurone Disease association by undertaking a 170 mile cycle ride from Chepstow to Prestatyn which will run parallel with Offa's Dyke.
The reason we are doing this? Our good friend James Stevens was sadly diagnosed with Motor Neurone Disease back in May. James has been a member of the Seend Cleeve Cycling Club for around six years and has cycled thousands of miles with us all over Wiltshire, Somerset, Gloucestershire and beyond. Last September he did the Wiltshire 100 mile sportive from Devizes to Salisbury and around to Marlborough and back. At the end of 2017, however, James started to struggle with his cycling finding the hills hard going, which was surprising to us because he was one of the best hill climbers in the club. He started then to only come out now and again on a Sunday morning because he was struggling. We did manage to get him out on his bike over the 2017 Christmas period and cycle over Salisbury Plain and through Imber which we had done a few times before. Jim again struggled a bit on this ride but we all put it down to having too many mince pies over the holiday and generally not being "cycle fit" to face the hills. James Last cycled with the club on January 7th 2018 on a cold, wet and miserable day doing a 50 mile loop around the north of Chippenham. Apart from being tired near the end of the ride James put on a brave face and headed back to Devizes along with Duncan Wilcocks. Duncan later reported that Jim had a to stop a few times going up Caen Hill which was very unlike him. Unbeknown to James, this was the onset of the as yet undiagnosed Motor Neurone Disease. James is a fantastic cyclist (I refuse to say he "was"!) and I have cycled more miles with this man than any other cyclist - probably somewhere between 4000 & 5000 miles. During our many miles together We both had a competitive spirit and if the mood took us we would race each other either on the flat or up a hill. I'm not ashamed to say that JIm was far better up big hills than me. We were like a pair of school boys sometimes racing each other and laughing whilst doing it always trying to get the upper hand. Roll forward from January until James diagnosis in May, he was still keen to come out with us but the mind was very much willing but the body was not so keen. We were all absolutely devastated to learn of James diagnosis just a day or so after his 51st birthday. Shell shocked would be a perfectly apt description. We have been in close touch with James since his diagnosis and as a club we decided that we needed to do something to raise not only much needed funds but also the awareness of this awful disease that has no cure. It was therefore apt that we should undertake this long ride from south to north Wales. James has chosen that the money raised from this cycling event should go to The North Wiltshire Group of the Motor Neurone Disease association so that it may help others who have been afflicted with this illness. Every rider on this event has all cycled many miles with James and I'm very sure he will all be in our minds as we tackle some of the steep climbs that lurk in that neck of the woods. Our only regret is that our friend won't be on a bike with us during the event but we will be taking his cycling helmet which will have pride of place on the dash board of the mini bus which will be our support vehicle. He will definitely be with us in spirit!
Please donate to this very worthy cause to not only help James but others who have this disease.
Many thanks,
Graham Hickman