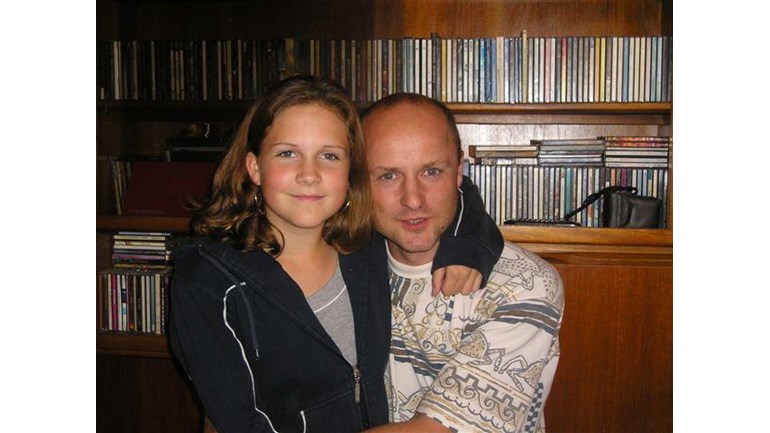 competing in a 24 hour run http://www.tr24.co.uk for CLIC Sargent because they allowed kez's mum to stay by her side.

Andy Watson and I are competing as a pair in the thunder run. Use the link above to find out more, but briefly we are taking it in turns to run a 6.2mile cross country course over a 24 hour period. We are aiming to run 100 miles between us over the 24 hour period.

We did it and a bit more. We ran 124 miles between us in 22 hours by which time injuries, fatigue, sunstroke and flu took over and we called it a day. We will be next year so please get saving. Thank you to everyone. Your support has mean't a great deal.

FOR KEZ,  MY DAUGHTER

I will always remember Kez as the bravest person i have ever known. She always denied this bravery and looking back at some of the things she wrote, i start to understand that she was so scared, she didn't see herself as brave. But to fight through all the fear and pain with a smile on her face, with hope for a normal life, was the bravest thing of all. Kez spent 2 years battling tracheal cancer, undergoing numerous complex operations and unthinkable hardships. In italics below is a brief summary of what she went through. It is by no means complete but gives you an idea of how hard she fought. After the summary i explain why Clic Sargent helped so much. Thank you for taking the time to look.

Unfortunately all of her trachea was affected so sectioning the trachea was not an option so she chose pioneering stem cell surgery instead where a donor trachea would be transplanted. The donor trachea had all donor cells removed leaving only the cartilaginous tissue and this was seeded with kez's own stem cells recovered from her bone marrow. A blood supply would be brought up from her stomach to supply the trachea and the area of affected oesophagus was to be cut away, irradiated and stitched leaving stomach where it was . The stem cell approached had only been tried twice before and the operation took place in Florence Italy in July 2010.

After 16 hours in surgery and 53 personel, Kez spent 2 long and painful weeks recovering, fighting for her life on more than one occassion, not being able to eat or drink for the first few days and having to cough regularly to remove the mucus build up in her lungs which after she had been cut open from neck to belly button was excruciatingly painful.

After her return to london, she spent another week in hospital at University College Hospital in London before being released pending numerous returns to change her stent in her new trachea. The stent was keeping trachea open until the tissue around it grew back and supported it. She was in and out of hospital every month for about a week at a time recovering from these changes but she could eat and drink. During these times Clic Sargent began allowing Kez's mum to stay in a house close to the hospital free of charge so she could be close to kez and support her. The house had everything and also gave kez a plaace to go away from the hospital when she was well enough.

Finally the stent was removed in december 2010 but kez trachea closed due to swelling and a hole was discovered between her oesophagus and trachea. Emergency surgery got her intubated and she was put on life support for 2 weeks to allow the swelling in the trachea to go down. Unfortunately during this time the tube supplying her oxygen was yanked out and in haste to put it back in, the tube caught on the hole between the trachea and oesophagus a ripped it until it was 4 cm long. The oesophageal tissue was old and fragile because of the irradiation treatment during the italian operation and ripped easily.

Over christmas, She was slowly brought off life support and an operation was tried to repair the hole. This operation included fitting a tracheostomy as a temporary measure to take the strain off the effected area. The night after the operation the stitches ripped and kez almost died and had to fight for her life for a second time. But she recovered and went home for 3 weeks learning to cope with the tracheostomy. She could still eat, drink and talk at this stage.

In February 2011, A second attempt to close the hole resulted in the same thing happening, the stitches ripped, breathing became a problem, in fact she suffocated and died for a short period. After this operation, she could no longer talk, eat or drink and had a permanent naso- gastric tube draining her stomach. Indeed she never ate, drank or talked again.

It was decided that the area needed time to recover so nothing was done for a few months.Again kez was in and out with breathing problems until she had to have emergency surgery as the trachea which ws once pink and healthy, was dying and mutating. IT had developed a second blind branch into which her trachy tube kept falling suffocating her on almost a daily basis. The 7 hour emergency surgery helped her breathe once more so that a second transplant, this time using artificial tracheal tissue, could be performed in october 2011. The surgeons also hoped to remove the damaged oesophagus which was showing no signs of healing and replacing it with a section of large intestine.

The second transplant was a sucess and Kez had clear breathing for the first time in a year but the oesophagus repair could not take place, there was not enough undamaged tissue to stitch to so muscle from her neck was wrapped around the hole in the hope it would knit. It never did.

Over the next 2 months Kez had brief periods at home but there was soon signs that things were not right and bronchoscopy's showed that scar tissue, where the new trachea was attached near her bronchi, was growing and again blocking off her airway. THis was lazered off but over the christmas period she developed pneumonia and she knew in herself that things were gettting difficult.

However noone expected that on the 9th january during a bronchoscopy, a specialist found that the tissue had grown so rapidly that Kez had less than 24 hours to live as the airway would be blocked off and this time there was nothing they could do. Kez was taken into an unconscious state with morphine and her life support was switched off at about 7am the next morning.

She was moved on her last day to a private room in intensive care where so many friends, relatives, and staff came to say their goodbyes to Kez. She managed to stay awake and smile to everybody on that last evening until she drifted into unconsciousness. When she was given the news, Kez was still insistant that she would fight on. Throughout the whole illness she believed she would win and be able to have a normal life with her ever loving boyfriend Joe who stood by her through everything.

Kez's surgeon came to the funeral along with a number of the nurses who cared for her and even cleaning staff, all of whom had built their own relationships with Kez. Her surgeon spoke at her funeral. He also talked of her bravery and strength and selfless nature. He also talked of the invaluable knowledge gained by the research teams working on stem cell technology.

Kez constantly lived in fear that her trachea could suddenly fail, and for the last 10 months of her life was fed through a tube into her small intestine. Yet she still smiled, joked, and was an inspiration to so many people. She organised for joe to meet Mo Farrah and this was filmed for ITV . She baked cakes for the staff at the hospital even though she longed to be eating them herself. Her first thoughts were always for other people even though this disease was constantly hung over everything she did. All the times that new ideas were tried, she was given hope  only for it to be taken away but still she would find it in herself to live to fight another day.

I could go on and on but i just want to reiterate that all the time Kez was in hospital in central london, Clic Sargent had a room (and access to every home comfort that you could think of) available for Kez's mum and family members to stay in. Without her mum, Kez would have been unable to cope but through Clic Sargents help, her mum was never more than 5 minutes away from her bedside. In the last year Kez must have been in hospital for about 10 of the 12 months.

Kez could use the house  whenever she felt fit enough to relax with friends, watch dvd's or play video games or cook. Very occasionally she slept there when she felt confident enough to be away from the hospital. I never could understand how she could cook when she so desperately wanted to eat. On numerous occassions she cooked for her mum and baked cakes for the staff at the hospital. But this was Kez all over, always thinking of other people before herself.

I will have left out a lot of this story. There is so much to tell, but i think i have given you an insight into why i am raising money. There will be other charities but this time it is Clic Sargent.

I LOVE YOU KEZ AND I ALWAYS WILL.