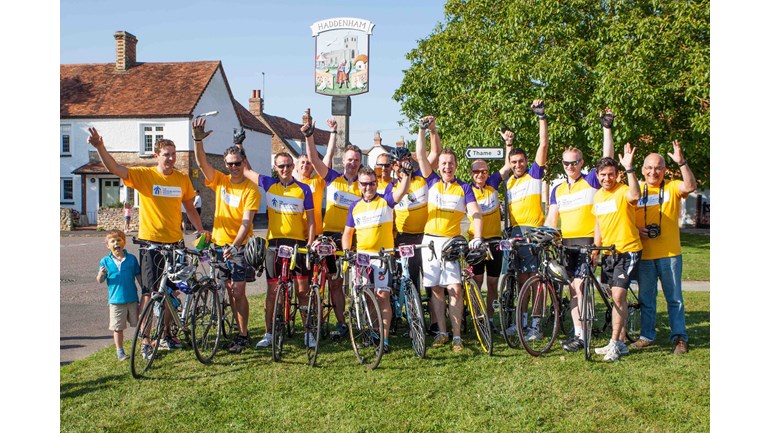 The Haddenham 100 bike ride in memory of Lily Gray

Thank you for visiting The Haddenham Lads JustGiving page, raising money for children's cancer charity The Neuroblastoma Society in memory of Lily Gray. Lily, the youngest daughter of one of the Haddenham Lads, lost her battle against the disease on September 19 2013, aged just 2 years and 3 months old.

Lily was a funny, feisty and beautiful little girl, full of spirit and always true to herself.  She was a sociable baby and thriving toddler who loved playing with her many friends in Haddenham and from around the UK and the world, doing exactly the things that all young children do.  She went to the local Haddenham playgroups where she had lots of fun with her pals and she also had lots of adventures at the duck pond, in the garden, as well as at home.  She adored her big sister and they were always very close.

In January 2013 after becoming unwell quite suddenly, Lily was diagnosed with a type of cancer called neuroblastoma.  This disease is rare and unpredictable and requires an intensive regime of treatment.  Lily responded extremely well to her induction chemotherapy between January and April, and to her surgery to remove a tumour in May.  Her high dose chemotherapy and stem cell transplant in June and July appeared to go well.

Unfortunately, by early September it had became clear that the neuroblastoma was just too aggresive and all treatment was stopped.  Lily passed away on 19th September in her mummy's arms.

Even after Lily became ill, she remained happy, positive and determined to do all the normal things that little girls love to do: drawing, painting, pushing her toy doggy and prams, running, CYCLING(!), and copying anything her big sister did.  She was truly an amazing and inspiring little girl, lighting up the lives of everybody who had the fortune to know her.

Neuroblastoma is a nasty disease, often much more aggressive than other childhood and adult cancers.  We need a breakthrough and this can only happen through medical research.  This is why we've nominated The Neuroblastoma Society as our chosen charity in memory of Lily.

If you would like to make a donation and leave a message on this page that would be appreciated as a simple way of celebrating Lily's life.  In supporting The Neuroblastoma Society you will be helping to find a cure for the disease that she fought so hard to beat.

Neuroblastoma is a rare aggressive childhood cancer. About 100 children are diagnosed in the UK each year. Neuroblastoma UK works exclusively for these children in raising funds for British led research into the disease, and offering information and support to families affected by neuroblastoma.