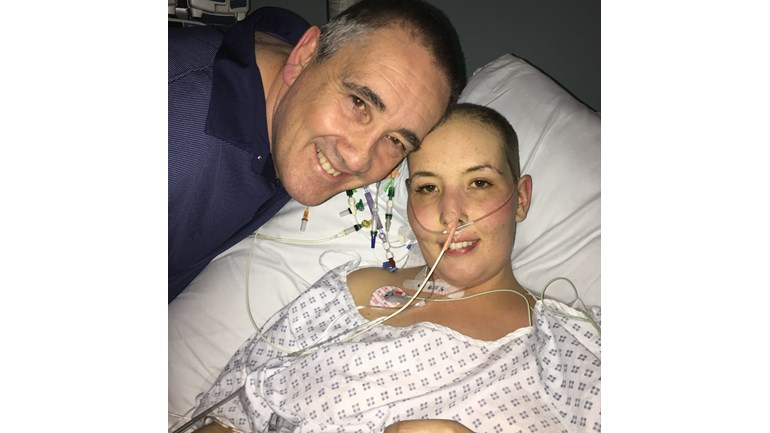 We support Addenbrooke's and the Rosie to change patients' lives.

Hannah, our youngest daughter, was diagnosed on 12th September 2016 with a severe case of leukaemia and admitted to Addenbrooke’s Hospital in Cambridge. Unfortunately within 48 hours of treatment her lungs had become fully saturated as a result of the treatment required for her specific type of leukaemia and she was unable to breathe by herself. Hannah was put on a ventilator and transferred to intensive care, two hours into her 23rd birthday.

Fortunately her lungs began to function on their own several days later, however it was clear that everything was not right and it transpired that Hannah had suffered a stroke whilst on the ventilator and had lost most of the use of her right side and some of her eyesight.

Already faced with the terrible news about her leukaemia this was a desperate blow to us, however over the next few days Hannah started to display some small steps of recovery from her stroke and was transferred to the Teenage and Young Adult Cancer ward.

As Hannah’s blood results were so extreme the constant priority for her medical team was to try and carefully maintain her bleeding/clotting balance, however, within a fortnight, Hannah unfortunately suffered another significant trauma with a major loss of blood to her colon and spleen and she was rushed back into intensive care and yet again placed on a ventilator. The next fortnight was spent living on a knife edge as the wonderful intensive care team and haematologists managed to balance all her issues to enable her to again be removed from her ventilator.

A few weeks later following a recovery route back via intermediate care, Hannah was back in the TYA ward where to everyone’s surprise, despite all her issues she was found to be in remission from her leukaemia.

In December, following a lengthy delay post-induction phase to help her colon to partly recover, Hannah commenced her consolidation treatment phase and her daily regime since then has consisted of receiving further treatment and learning to walk again following her stroke. She was discharged from Addenbrooke’s just before Christmas although she has been readmitted several times since then with a variety of complications and new issues, including hypercalcemia and pancreatitis.

As things stand, Hannah is still receiving treatment but has recently received the terrific news that she is still currently in remission.

Myself and my wife Judy, our wider family and friends are full of admiration for the way she has battled through times when they were expecting the worst. Hannah’s determination and resilience coupled with the dedication and knowledge of her consultants and doctors have got her where she is today, although unsurprisingly given her other medical issues she struggles with her treatment which causes frequent sickness, nausea, extreme tiredness and sometimes chronic bouts of abdominal pain, her colon eventually discovered to have been almost fully ulcerated and her spleen badly damaged.

Obviously there is a long way to go, but given what Hannah has endured, everybody remains hopeful that she can continue to remain in remission and ultimately be cured of her leukaemia and make as full a recovery as possible from her stroke and abdominal issues.

Hannah has been kept safe by so many people across many departments within Addenbrooke’s Hospital (Haematology; Intensive Care; Intermediate Care; Neurology; Stroke Recovery; Opthalmology; Speech and Language; Gastro-Enterology; Neuro-Physiotherapy; Dietary and ENT) and we owe her life and her recovery to everybody’s expertise and care. We would like to raise money specifically for equipment that has been relevant to Hannah’s journey and experience, particularly for those future patients who experience life threatening medical issues above and beyond their leukaemia diagnosis.

Our aim is to raise a total of £28,200 for equipment for Addenbrooke’s Hospital Cambridge

The machine allows bedside assessment without the need to move critically ill unstable patients to remote areas. The current machine has needed repair twice in the last year which left the units without a machine for several weeks.

Many of the young people admitted to the ward are very unwell and need intensive medical and nursing support. Managing fluid balance is vital and many young people require a urinary catheter to accurately record their output. To place this safely the ward needs to use a bladder scanner which at the present time, they have to borrow from another ward, leading to delays and which poses a potential infection risk by moving equipment between wards. The provision of a bladder scanner on the ward would enable the staff to undertake catheterisation much more efficiently and safely.

An electronic urine analyser would automatically assess the contents of urine, a vital diagnostic tool for many conditions including infections, renal damage, liver problems, bleeding, etc. At present the results are read by comparing the changes in colour on the test strips against the scale indicator on the container, potentially risking human error in this manual assessment. A urine analyser linked to the computerised record system would enable immediate and accurate input of results into the patient record directly from the machine, avoiding the need for a nurse to manually assess and input the data onto the system reducing delays in data entry and removing the risk of transcription mistakes. All patients on the unit have their urine tested regularly, often multiple times a day, so this analyser would have a considerable impact on nursing efficiency.

Hannah had her nails painted whilst on the TYA ward as a pampering treat offered to all the young ladies. For a laugh Hannah suggested I did the same and I thought it was an ideal fundraising initiative. For my sins I'm an avid West Ham season ticket holder so I've had my toenails painted claret and blue in West Ham’s colours and will keep them this way for as long as Hannah receives treatment, hopefully the next 27 months!

We believe that every patient deserves the best possible care. Our aim is to support cutting edge technology, additional specialist services, vital research and extra comforts for patients over and above NHS funding. On JustGiving a chosen area for funding can be specified in the 'My Story' section.

Charity Registration No. 1170103
Find out more about charity fundraising