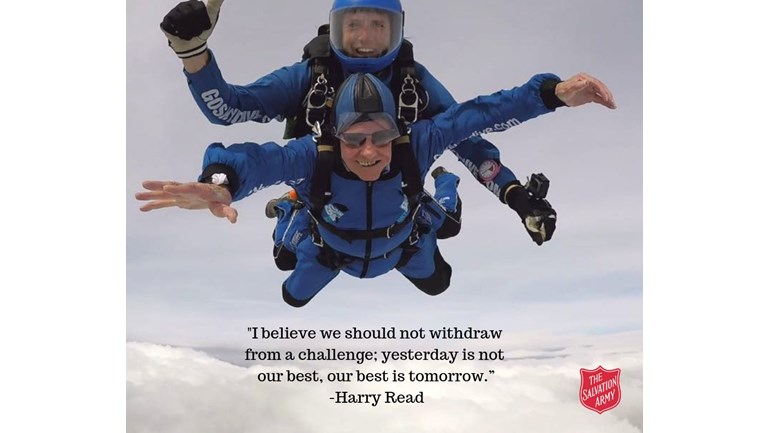 We provide unconditional friendship, support and practical help to people in crisis and in need. We work with children, homeless people, all adult victims of modern slavery and those dealing with drug and/or alcohol addiction

At 95 years old I am planning on skydiving into Normandy to mark the 75th anniversary of the D-Day landings on June 6th 1944. The jump will take place on June 5th 2019 landing into Sannerville, Normandy.

Some of you will know that in World War 2 I was a
Wireless Operator serving in a Parachute Brigade and, as a young twenty-year old, I parachuted into France very early (00.50 hours) on the morning of D-Day. This was the last time I parachuted.

After visiting Normandy for the D-Day ceremony last year I had the idea that I wanted to parachute into the celebrations this year to mark the 75th anniversary. I was informed this would be possible and went about researching.

The more I thought, and prayed, the more foolish it appeared to parachute in Normandy without having first done one here in the UK. I completed this 'test' skydive at the Old Sarum Airfield on Friday 14th September 2018. Thank you for all those who donated to me at the time, all the money I have raised will go to support The Salvation Army's work to fight trafficking and modern slavery.

Now on June 5th 2019, the day before the D-Day anniversary I will be completing a parachute jump in Normandy. I will take off from Cambridgeshire with the Red Devils Parachute Display Team in the morning and we will fly over to Normandy where we will parachute into the celebrations.

My question is, therefore, would you consider sponsoring me for such a good cause? Do bear in mind that parachute jumps are dependent upon reasonable weather but all being well I will be jumping again on June 5th - almost to the hour since my jump into Normandy 75 years ago.

You might well be asking where God comes in on this and I take the question seriously. This started out as a very modest desire for a low-level parachute jump which has, seemingly, been elevated to a high-profile event with the Red Devils team. However, every aspect of this proposal has been bathed in prayer and, when my normal common-sense has asked its questions, I still have the quiet, over-ruling assurance that, our heavenly Father is approving to the degree of being in charge. I don’t know where, or how, this will glorify him but he is telling me to trust him, and I will.

You can read more of my story on the Guardian website here: https://www.theguardian.com/world/2019/may/13/d-day-veteran-harry-read-94-parachute-into-normandy-75th-anniversary

With every blessing,
Harry.

The money Harry has already raised and continues to raise will go to The Salvation Army's Victim Care Fund.

The Victim Care Fund provides additional support to survivors of modern slavery. It funds essential items outside of the support they are entitled to through the Government contract and was established to help victims of modern slavery where no other funding is available to meet their immediate needs and to ease their transition to independent living. This might be a deposit for someone to move into their own home, clothing for a job interview, or a bike to get to work. The fund is secured from within The Salvation Army’s charitable funds and is actively supported by thousands of generous donors through fundraising activities, one-off donations or regular giving initiatives. Through the Victim Care Fund, The Salvation Army has also provided financial assistance for some of our partners to pilot innovative schemes, which benefit a number of people in their service such as cookery classes, befriending programmes and employment and training opportunities.

Modern slavery is a serious crime. It encompasses slavery, servitude, and forced or compulsory labour and human trafficking. Modern slavery victims can often face more than one type of abuse and slavery, for example if they are sold to another trafficker and then forced into another form of exploitation.

A person is trafficked if they are brought to (or moved around) a country by others who threaten, frighten, hurt and force them to do work or other things they don’t want to do.

What is The Salvation Army doing to help?

children are trafficked every year

- 77% of trafficked victims are women

- 87% of trafficked victims are sexually exploited

Modern slavery is happening in the UK

Modern Slavery exists in our own, comfortable, local communities here in the UK. Everyone should be alert to the signs that someone you come across living nearby or working perhaps in a shop, on a farm or a building site, is not there of their own free will.

Since The Salvation Army were awarded the government contract in 2011, they have designed a specialist support programme to preserve the dignity of survivors, protect and care for them in safe accommodation, and provide access to confidential client-based support services.

The Salvation Army is a Christian Church & registered Charity working in 130 countries worldwide and is one of the largest and most diverse providers of social welfare in the world. In the UK and Republic of Ireland this work includes more than 800 Salvation Army social service centres and Community churches. We provide unconditional friendship, support and very practical help to people in crisis and need and work with children, homeless people, all adult victims of modern slavery and those dealing with drug and/or alcohol addiction. Alongside our work in the UK, The Salvation Army International Projects Office works with communities around the world to support and empower them to defeat poverty and injustice. Our development projects are created and implemented in partnership with communities to enable them to build a better life and future for themselves. The Salvation Army is a Christian Church & registered Charity in England (214779), Wales (214779), Scotland (SC009359) and the Republic of Ireland (CHY6399)

Charity Registration No. 214779 and in Scotland SC009359
Find out more about charity fundraising