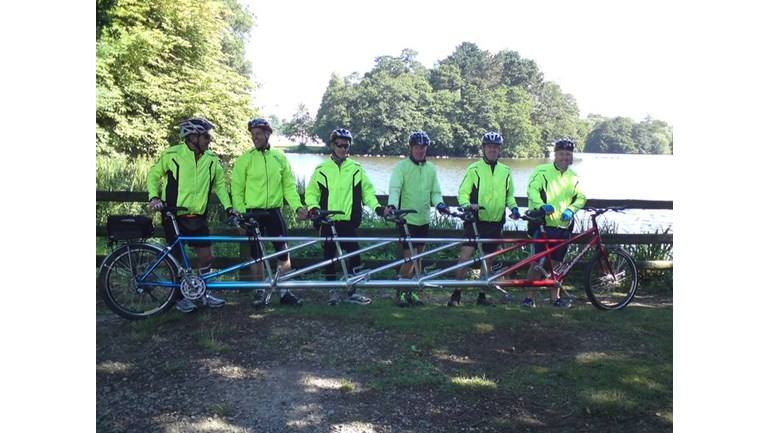 We fund breast cancer research and care to provide support for today & hope for the future.

Competed in many ultra-marathon running events for many different charities and sought a new challenge other than running. Bike ride idea from John in memory of his brother Roy who died from bowel cancer. Decided to bike from John O Groats to Lands End. Whilst looking for a bike, found a 1930’s 4-seater bike on ebay. Imagination kicked in and decided to look into possibility of a 6-seater bike to accommodate the team.

Bespoke 17ft long, 6-seater (Hex), designed and built in America by Santana. Chromalloy frame with interchangeable sections via S+S couplers and Santana designed bottom tube coupler. Can be configured to be a 3, 4, 5 or 6-seater bike. (Triple, Quad, Quint or Hex). Hubs manufactured by Hadley Racing. Captain has control of the front brakes. Stoker No. 5 (the last man), has control of the back brakes and gears. Imported and commissioned by Ruth and John of JD Cycles, Ilkley, Leeds.

Cancer related charities to include:

We’re Breast Cancer Now, the charity that’s steered by world-class research and powered by life-changing care. We’re here for anyone affected by breast cancer, the whole way through, providing support for today and hope for the future. By 2050, we believe everyone diagnosed with breast cancer will live – and be supported to live well. But we need to act now.