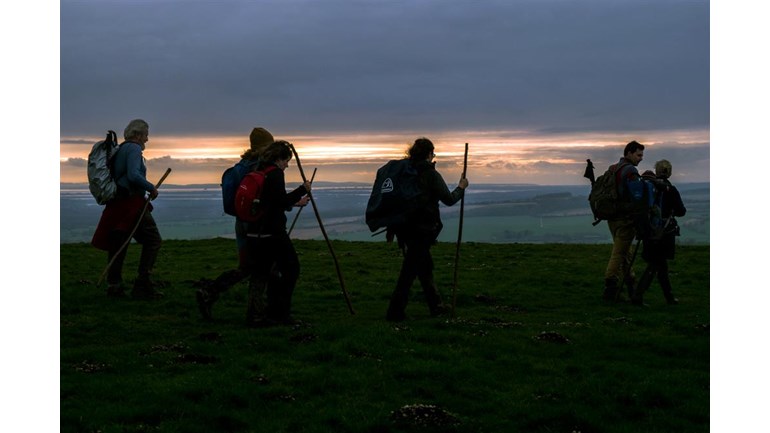 Please sponsor us for this great cause (the page has been kept open longer for donations given the worsening housing situation). We hiked this ridiculous exhausting distance to raise funds for Shelter and support a call for action on housing. The cold winter of 2018 reminded us again that as a nation we have failed to house far too many. 120,000 children were in temporary accommodation last Christmas damaging their life chances. I was shocked by the lack of support for critically ill homeless in a  BBC Radio programme ,Dying on the streets. It told one story of a 60 year old man, Paul Hawkrigg, who died alone under a bush in Barrow two weeks after major surgery to remove a Brain Tumour. His body was identified by his hospital wrist tag.

(Update - the Bureau of Investigative Journalism (BIJ) October 2018 made a likely underestimate that 440 homeless people died on the streets in 2018. No official figures are kept)

After 30 years in local government planning, I know that local politicians, planners and housing teams, in partnership with developers, would do so much more if the rules were different and could be applied over the long term.

We've all seen Right To Buy remove social housing, leave local authorities short changed and then the public purse out of pocket as high priced flat rentals are occupied by people on housing benefit. 90% of national house spending is on benefits and only 10% on housebuilding. The money that is spent is skewed by "Help to Buy" which benefits a few purchasers and shareholders but represents poor value for public money. I've seen how the land auction system squeezes out small builders, self-builders and housing co-ops that most people would want to support. I've seen speculative land companies that trade in permissions to the advantage of their shareholders and landowners but undermine the potential wider benefits of development. I've seen the Viability Industry, the re-definitions of affordable housing and new permitted development rights all reduce social housing provision. I know that housebuilders need to keep building, but they can never build so quickly that prices would fall. Its not their business model. So best not to pretend it will ever happen. The landmark Planning Act of 1947 envisaged land value capture for the community and purchase of land at existing use value to enable new infrastructure but this was reversed in 1961. Now each new home is said to provide a return of £60,000 to the landowner, a something for nothing economy, if you happen to own land.

Access to secure, warm and well designed housing is recognised as a basic Human Right under the UN Declaration of 1948 - Article 25. After nearly 10 years of austerity, with the challenges of Climate Change, Brexit, Boom and Bust, Job Insecurity and the impacts of Work Automation , poorer sections of society in particular need to see radical change. Public land should be acquired and used with communities actively involved in design under Community Land Trust, co housing and Cooperative Schemes. Providing genuinely affordable housing for purchase and rent is a win-win situation with multiplier benefits for the common good, it addresses an immediate need and supports health, education, family and community resilience. It makes good social and economic sense.  Here are some suggestions to deliver it.

Many of the above ideas were covered in Shelter's excellent report New Civic Housebuilding 2017 which highlights the limits of the current speculative housebuilding model.

I'm banging a political drum as I walk, not for party politics, but for cross party collaboration to address urgent housing needs. Cathy Come Home shocked the country back in 1966 but it wasn't until 1977 that Shelter and others achieved the Homeless Persons Act,brought under a Private Members Bill by the MP for the Isle of Wight. So we come full circle . Parliament, its time to respond to the call of the people for active housing policies.

Thankyou for supporting Shelter and this call for Action.

Shelter works to alleviate the distress caused by homelessness and bad housing. We help people find and keep a home. We campaign for decent housing for all. Our work won’t stop until there’s a home for everyone.

Charity Registration No. 263710
Find out more about charity fundraising