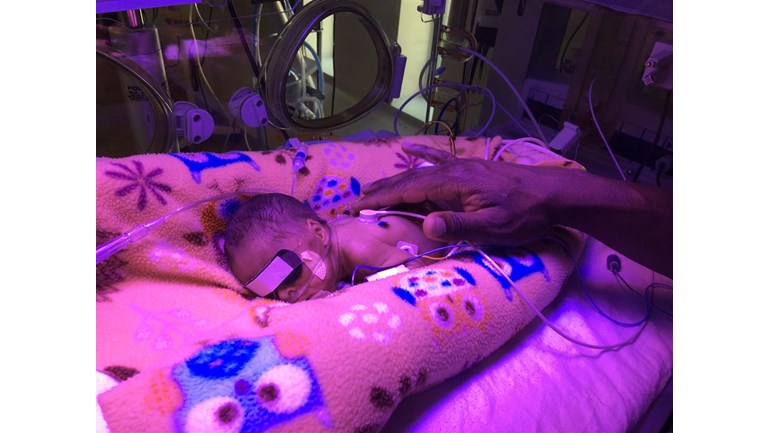 A sponsored walk to celebrate Hudson: born at 27 weeks.

A five mile sponsored walk on 3rd December for Bibs Babies In Buscot Support because of the life-saving care Hudson received.

Thank you so much for taking the time to visit our JustGiving page. Myself and a few close friends are taking part in the walk and would really appreciate a donation for 'Bibs', no matter how big or small and we thank you in advance.

Donating through JustGiving is simple, fast and totally secure. Your details are safe with JustGiving - they'll never sell them on or send unwanted emails. Once you donate, they'll send your money directly to the charity. So it's the most efficient way to donate - saving time and cutting costs for the charity. If you are a UK taxpayer don't forget to tick the gift aid box!

During a healthy first pregnancy, my waters suddenly broke one evening when I was just 27 weeks and four days pregnant.


Within half an hour we were at The Royal Berkshire Hospital and when examined I was told that the baby would be here within the hour. Many people have commented on how petrified I must have been, but for reasons I cannot explain; I was extremely calm. I knew that panicking would not help, I just had to trust the staff to carry out their jobs.

During labour, Hudson’s heart rate significantly decreased and I was rushed to theatre where I was put to sleep and had a Category 1 C-Section. Derek, my husband waited in a room for a couple of hours, not knowing what was going on until the staff brought Hudson in an incubator to the room so Derek could see him. He was just 2lb 2oz and the doctors seemed extremely worried, it was certainly not the arrival we had ever expected and immediately after Hudson was taken upstairs to Buscot Neonatal Ward.

The next morning when I first met Hudson, he was already in the transport incubator in preparation to travel to the John Radcliffe Hospital in Oxford, where a more intensive level of care could be provided. All I could see was one little eye, as the rest of him was covered in medical equipment. Later that day I too, was transferred to be in the same hospital as him.

Later that night after we arrived, one of the consultants working with Hudson told us that they were fairly sure that he would survive. However he warned us that the next five weeks would be an emotional rollercoaster and oh how right he was! Once Hudson was transferred back to Reading at a week old, he was diagnosed with the following conditions over the succeeding weeks:

- A PDA (a duct in the heart which had not yet closed as it normally would after birth, therefore resulting in too much blood in the lungs)

and our biggest hurdle; an abscess that appeared on the liver when he was three weeks old, which sent him back to Oxford for a further two weeks and a six-week course of antibiotics. This initially caused him to stop breathing, to be intubated and placed back on a ventilator which would breathe for him.

Nothing could prepare us for these challenges, I visited Hudson in the hospital twice a day for his 10 week stay and I never thought that I would not hold my baby until he was a week old. However, we were quickly encouraged to take over his daily cares whilst on the ward; by changing his nappy, feeding and holding him. I was also encouraged to express milk, which was one of the hardest things I’ve ever had to do, especially throughout the night when we didn’t even have Hudson at home with us.

However, by the time Hudson got to 35 weeks gestation everything finally started to improve. We began to feed him orally; rather than through a tube, he was gaining weight and the abscess had started to shrink. He moved throughout the nurseries and a final ultrasound six weeks after starting the antibiotics confirmed that the abscess had completely gone. This now meant that we could get ready to take him home and were invited to stay in one of the flats on the ward. Here we could care for Hudson on our own, with the comfort of knowing that the nurses were just next door if we needed them.

Hudson miraculously came home two weeks before his due date and was 5lb, however he was still dependent on oxygen. We had oxygen installed in our house and when out, we had to take a portable cylinder with us. Some people were keen to ask us why he was on oxygen, others said that he was a miracle and then there were the people who looked in his pram and quickly looked away; scared at what they had seen.

Hudson fully came off his oxygen six weeks after coming home and is now a seven-month old baby who is doing everything a baby of his corrected four-month age would do and more! He shocked us when he rolled over just a week after coming home, he is full of smiles and is a very chilled out and happy baby. He loves playing and in particular, being around people; he will have a cuddle with anyone and I’m sure this is because he had so many nurses care for him. His follow up appointments with his community nurse and consultant have now also confirmed that his health issues have all resolved themselves. He is just a bit smaller than he would have been, but will catch up!

Doctors have told me that I will probably never know why Hudson came so early and that it is just one of those things.The staff at both hospitals were amazing and we will never be able to thank them enough for all of the love and care that they provided Hudson with. We also benefitted enormously from all of the work that Bibs have carried out through their fundraising and want to help raise some more funds because we know first-hand, how important their role is in supporting the ward. When 10% of all babies are born prematurely this is so important. Here is some of the work that they do:

- The refurbishment of the two overnight flats on Buscot Ward

- Refurbishment of the family room

- Purchase of a transport incubator (costing over £35,000) to safely transfer babies between wards and hospitals

BIBS supports babies and their families on the special care baby unit (Buscot Ward) at the Royal Berkshire Hospital. Monies raised go towards buying the latest technology and equipment for the ward, providing postnatal support to parents, and funding facilities on the ward for family and friends.

Charity Registration No. 1168487
Find out more about charity fundraising