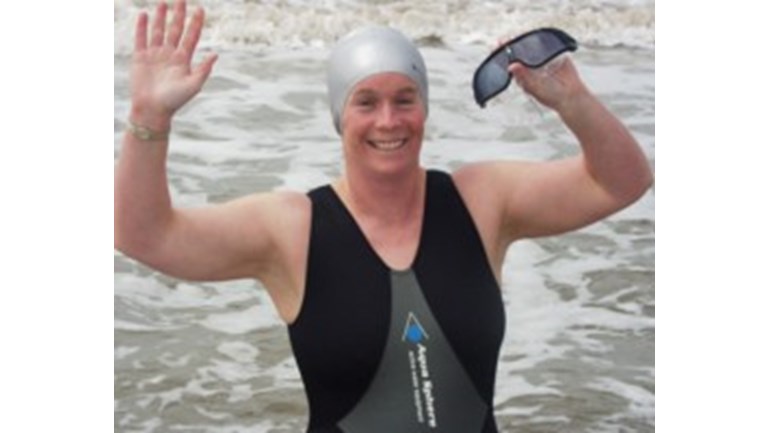 swimming the River Humber for Rainbows Hospice for Children and Young People because they're a great local charity!

We are Rainbows Hospice, our mission is to support the children that need us most

Bradshaw Goes for 21 World Record: Butterfly down the Humber

In her 21 year of long distance butterfly swimming, Dr Julie Bradshaw is to attempt her 21 world record by swimming butterfly 12 miles down the river Humber. For most people just one length of a public swimming pool (25 metres) butterfly would be exhausting enough. But Julie has to do the equivalent of a staggering 768 lengths! No wonder she has acquired the nickname ‘Mad Fish’!

The swim after three cancellations due to inclement weather has now been postponed to summer 2014. Julie will start at Spurn Point and finish at Cleethorpes. No person has even tried this notoriously challenging swim on the most challenging of all strokes: butterfly. The Humber is a very fast flowing waterway, so the swim will have to be timed to start at exactly the right time, or Julie will miss the oncoming tide…and be swept away to defeat.

Bradshaw, known also as ‘Lady of the Lakes’ (from her many records in the Lake District) flew into the Guinness Book of World Records when she swam butterfly across the English Channel in 2002 in a time of 14 hours 18 minutes, smashing nine hours off the previous record held by a Canadian. And she still holds the junior record for crossing the Channel when she was just 15.

In 2011 the record-breaking swimmer navigated 28.5 miles round Manhattan Island – butterfly – in extremely high temperatures in a time of 9 hours 28 minutes. This year’s challenge will be beating the cold (she doesn’t wear a wetsuit, just a normal costume). Bradshaw commented:

‘While the Humber swim seems a walk in the park compared to the length of the Manhattan swim, the record will actually mean more to me because it’s a home swim. I know to some people it may seem completely nuts to swim butterfly for so long. While it is a very hard stroke to keep going with for most, I personally don’t find it much harder than front crawl. But it does take some long hours of training to get to that stage. I don’t know why I keep trying what seems like the impossible. I suppose it’s just in my blood! And I just keep looking for new challenges!’

The Blackpool born swimmer received an MBE for 'Services to Swimming and Charity' in 2006. She was presented with an Honorary Doctorate by Loughborough University (she’s lived in Loughborough for over 20 years) the same year. The following year she was inducted into the International Marathon Swimming Hall of Fame, Fort Lauderdale, Florida, USA.