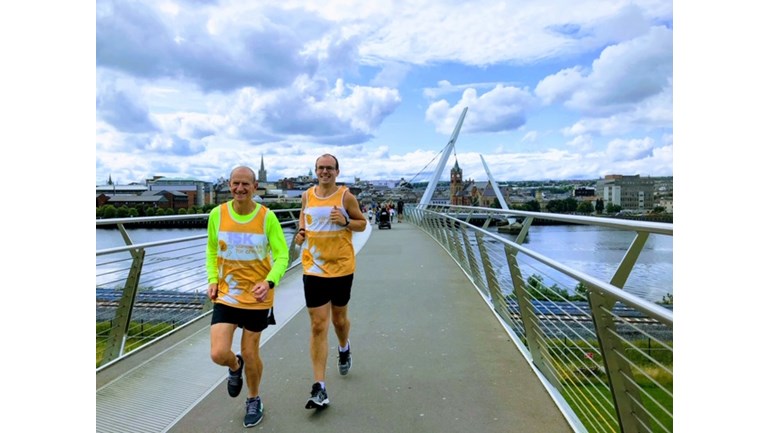 Like many other Chef’s, I have found that running is the perfect complement to the demands of the restaurant profession, on September 1st, I will take part in my first half marathon around my home city of Derry/Londonderry at the annual “Waterside Half Marathon” which attracts hundreds of runners around an iconic course on both sides of the River Foyle.

I will be running the race with my Dad Billy, a member of the local Foyle Valley Athletic Club, Dad has been running for many years and this will be his 21st Waterside half marathon.  Dad is also one of the Clubs coaches and has been putting me through my paces in preparation for the demands of a half marathon race.

As well as the personal challenge of running 13.1 miles, I have taken on the task of raising funds for charity.  There are so many fantastic charities doing unbelievable work in the community, but there’s a really poignant reason why I’ve chosen the NI Cancer Fund for Children.   I’ll be running in memory of my late brother Gary, who died from Leukaemia in 2004, aged 17.  The NI Cancer Fund for Children provided support not only to Gary, but to all our immediate family and I know that whatever funds are raised will help the ongoing work of providing support to children and their families throughout Northern Ireland who sadly have been affected by cancer.

If you prefer, donations can be made at any of the Browns Bonds Hill Group Restaurants; Browns in Town or Browns Bonds Hill in Derry/Londonderry, Browns on the Green in Letterkenny, or Ardtara Country House in Upperlands just outside Maghera.

Cancer Fund for Children provides practical and emotional support to local children and their families impacted by cancer. Our Specialist Team provides support at home, in the community and on the hospital ward. We also offer free therapeutic short breaks at Daisy Lodge in Newcastle.

Charity Registration No. NIC100532
Find out more about charity fundraising