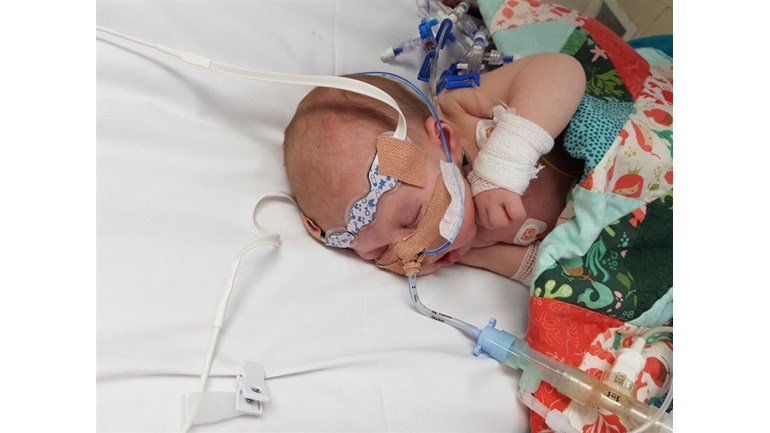 A couple of key points before long story:

Its pretty likely that my company will match any cash I'm able to raise, so every £1 you donate goes along way with this and gift aid!

I'm doing the Great North Run and I absolutely hate running so donations force me to stick with it. If you don't believe me my first run out was a blistering 13 minute mile, I don't think anyone can go slower without it being a walk.

Thank you for coming this far xx

On the 19th of December we were lucky enough to have our second child; she arrived without issue and very speedily. Our little Christmas baby was a wonderful gift and my wife and I felt incredibly lucky.

Unfortunately following a lovely Christmas she developed a temperature, nothing to worry about in my mind, especially with her sister being a typical snotty two year old. I woke up to my wife crying and saying we needed to take her in to hospital as temperatures in new-borns are very bad, again I though it wasn't anything to worry about and a bit of over protection from a Mam who as a paediatric nurse knew a little too much. I realised I was very wrong after phoning the ward and being instructed to bring her straight in to see them.

The results involved a number of very scary (for a parent) tests, taking bloods and spinal fluid and putting our baby on a course of antibiotics as well as 60 hrs in the QE and Sunderland general hospitals. It turned out she had developed viral meningitis, fortunately for us we thought this is nowhere near as bad as the bacterial type. So we got to take our little girl home with the belief everything was sorted and we could enjoy our New Year celebrations....unfortunately it wasn't to be so easy.

Waking on New Year’s Eve morning, Hollys hands were grey, quickly moving to her legs and then all over. We rushed back into A&E to spend the day with their team trying to reset a normal rhythm in our daughter heart before being transferred to Paediatric Intensive Care Unit at the Freeman. 11:45pm New Year’s Eve sitting in a waiting area we were informed our daughter was finally stable and that if we had arrived 15 Minutes later they believed we would be having a very different discussion. As it turned out, the meningitis caused an infection in her heart which caused an abnormal rhythm called SVT, beating at nearly 320 beats per minute. This caused her body to begin shutting down; she was throwing up every feed, having the doctors be unable to administer drugs as the veins in her limbs were unusable.

That night and the next few weeks she spent in hospital covered in wires and tubes were the most difficult of my life. With the help of the medical staff and the CHUF charity who support the ward our daughter made an amazing recovery from being intubated, covered in wires and a central line to a normal baby who you would never know had been through something so traumatic.

That brings me to The Sick Children’s Trust. Having one baby in intensive care and another at home raises some challenges in parenting and despite being relatively close the thought of leaving either child was horrible. The Sick Children’s Trust is designed to support this. They provided us with a room onsite at the Freeman, a cot for our eldest and all the facilities we required. But more than that they allowed us to be a family at a time when we needed it so much. I’m so grateful to them for this and I’m sure this helped us  stay sane during such a manic period.

Our Christmas baby Holly is doing so well after all her troubles and I have so many people to thank for saving her life. Not only saving her but also allowing us to keep our sanity, letting us be a family when we felt it was being torn from our grasp. I hope I can start to try and repay this incredible debt.

For saving my daughter’s life I will always consider my wife to be most responsible. Her knowledge, speed and competence in dealing with Holly’s deteriorating health is without question, why Holly is with us now. I will never be able to thank her close to enough.

If Holly can hold on for 24 hours with a heartbeat of 320 beats per minute a half marathon should be pretty simple right?