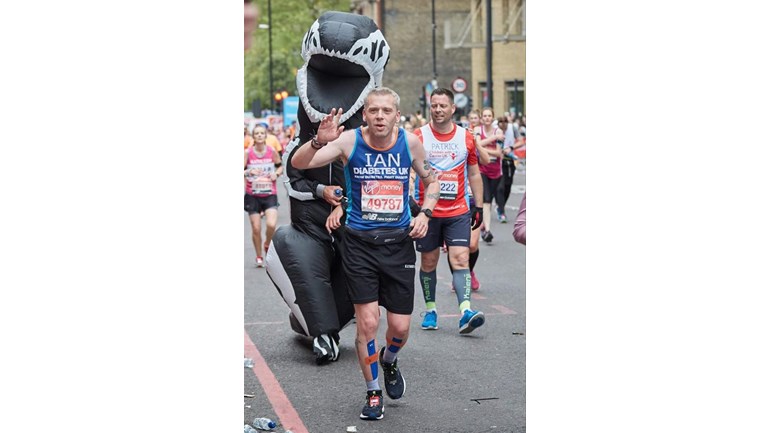 On Sunday 26th April 2020, conquer 26.2 miles in the Virgin London Marathon. The greatest marathon in the world. Help us reach a future where diabetes can do no harm.

For so many years I was told that Type 1 Diabetes would put a lot of restrictions on what I could do with my life.  As a 13 year old teenage boy I rebelled and for many years I really did fly by the seat of my pants when it came to looking after myself and my Diabetes care suffered.

After years of neglect, denial and allowing Diabetes to rule my life I finally took charge.  It was almost too little too late and years of not doing what I was supposed to do resulted in me losing my Hypo awareness, numerous hospital admissions and blue light taxis (ambulances) and a decline in my health.

The breakthrough for me came in the form of an Insulin Pump.  To say that this revolutionary piece of equipment has given me a new lease of life and turned my life around would be an understatement.

I finally managed to get my Diabetes control back to a reasonable standard and my health has taken a turn for the better.  As a result of having better control I can now do some of the things that I couldn't have even dreamt of before.  The main one of course is being able to run a Marathon.

In March 2019 I successfully ran the Inverness Half Marathon and then in April 2019 I ran, walked, hobbled and crawled my way over the finish line on the Mall and got a lovely London Marathon Finisher's Medal.  The feeling of achievement and elation will never leave me.  But I didn't stop there...

My main aim throughout has been to raise money for Diabetes UK. A charity that has helped me, and indeed every other Diabetic in the UK over the years.  I wanted to give them something back in return.  So I began racking up the training miles and took on the Simply Health Great Aberdeen Run in August 2019 and even knocked 10 minutes off my previous Personal Best which I'd set in Inverness back in March.  This training was all about the other big one though.  The Loch Ness Marathon on the 6th of October 2019.  After a cold and wet start I settled into the run and, despite picking up an injury in the last few weeks of Training, I crossed the Finish Line in a time of 5 Hours 40 Mins and 35 Seconds.  A new Personal Best!!!

So, finally to the point.  For 2020 I have decided to set myself the task of running not 1, but 2 Full Marathons and 2 Half Marathons.  These will be

- The Inverness Half Marathon on 8th March.

- The Edinburgh Marathon on 24th May.

I want to raise as much money for the Charity that has given me so much support over the years as I can and I think running 2 Half's and 2 Full Marathons warrants at least some of your hard earned cash.

On Sunday 26th April 2020, conquer 26.2 miles in the Virgin London Marathon. The greatest marathon in the world. Help us reach a future where diabetes can do no harm.