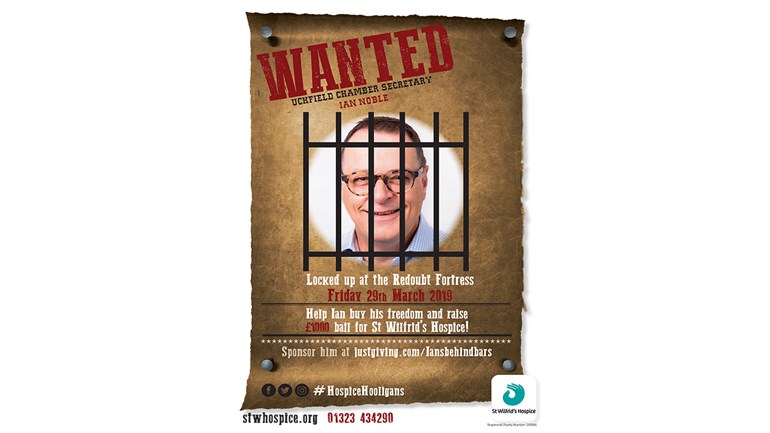 Jail and Bail is a new fundraising event for 2019, which will see a number of community leaders and well-known figures spending time behind bars (for entirely fictitious crimes!) at Eastbourne’s historic Redoubt Fortress.

The jailers’ only hope of freedom lies in raising £1,000 in bail money with the help of their connections, friends, family and - most importantly - the public! All funds raised are in support of St Wilfrid’s vital work.

The latest delinquent to spend time behind bars is Secretary for the Uckfield Chamber of Commerce, Ian Noble!

Prior to his current appointment, Ian spent many years working in and around East Sussex within Commercial Banking for Lloyds Banking Group and has also run his own business in Hastings for more than three years.

Ian has a ‘passion’ for helping businesses step up to support the third sector; he is a founding trustee of his local foodbank and has been known to volunteer as a charity auctioneer!

‘I am happy to support Jail and Bail. It costs several thousand pounds a day to maintain St Wilfrid’s, and none of us know when we might need that kind of support.’

Seemingly noble in both name and nature, Ian is also the Charity Mentor Co-ordinator for East Sussex, an organisation that provides pro bono support to charities and community groups across the county.

However, it seems that not everyone in the community is enthusiastic about Noble’s ongoing support for worthy causes, as in September of last year he was convicted by a jury on one count of ‘making the rest of us look bad.’

One member of the jury explained their grounds for conviction: ‘While we are not opposed to the occasional act of do-goodery, frankly, Ian’s activities were beginning to get a bit out of hand.

‘Through his work with Uckfield Foodbank, he’s been helping hundreds of people in crisis, then there’s the charity auctioneer work. It just makes the rest of us look at bit lazy, really, and that’s quite embarrassing.

‘The last straw was when he offered to raise £2,000 for Jail and Bail instead of the recommended target of £1,000; I think it was to show up the other participants.’

Whether Ian’s charitable acts are a penance for the 37 years he spent in banking is still unclear, but he welcomes any contributions to set him free...

St Wilfrid's Hospice is a local charity providing skilled and compassionate care and treatment for all patients and their families with complex needs as they near the end of life. St Wilfrid’s Hospice serves a population of around 230,000 living in Eastbourne, Polegate, Pevensey, Seaford, Hailsham, Heathfield, Uckfield and everywhere in between. For more information, visit www.stwhospice.org

Charity Registration No. 283686
Find out more about charity fundraising