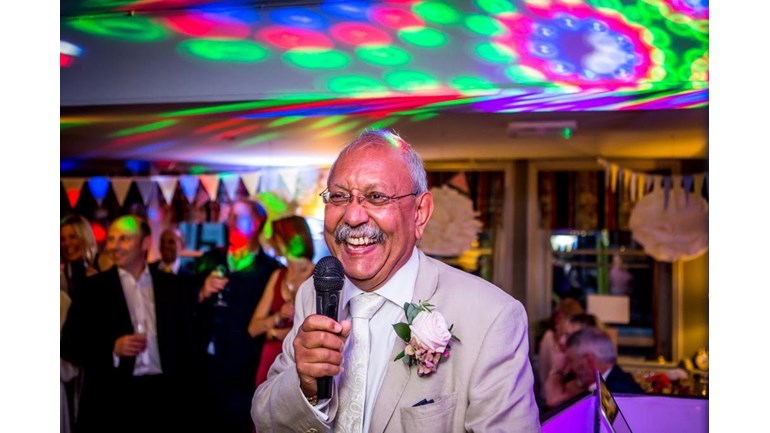 In Loving Memory of Ashok Ranchhod

to help further research of Peritoneal Cancer for Hampshire Hospitals Charity because our dear loved one sadly passed away from this.

Funds held for any charitable purpose or purposes relating to the National Health Service wholly or mainly for the services provided by Hampshire Hospitals NHS Foundation Trust.

This is in memory of Professor Ashok Ranchhod, a kind loving Husband, a devoted Father, an adored Grandfather, a true great Friend and learned Mentor.

Ashok was born in Lusaka, Zambia in 1948 and from an early age demonstrated his desire to help others. He was an active member of the scout movement and rose through the ranks to achieve the highest standard of proficiency as a Queens Scout.

He was very proud that in October 1964, during the Countries celebrations, he took centre stage, raising the flag declaring Zambian independence and seeing the end of Northern Rhodesia.

In 1966 he struck out on his own moving away from the family in Zambia to the UK, setting down roots in Sheffield with the aim of furthering his education and creating a platform for a better life for his his future wife and children.

Ever the academic, Ashok completed his degree in Chemistry at the University of Sheffield and went on further to complete a Masters in GeoChemistry before founding a plant cloning technology company (Microplants), in the 1980’s. Microplants was a trailblazing company being one of the first companies to in the cloning space, even attracting the attention and recognition of Prince Charles whom Ashok had the pleasure of meeting during his time with the company.

Drawn by his desire for learning and insatiable appetite for research and knowledge Ashok went back to school completing his MBA at Sheffield Business School where he discovered his passion for Marketing.

Ashok remained in the academic sector until the very end and leaves behind a proud legacy of achievement including a Fellowship at the Charted Institute of Marketing, Visiting Chairs at Napier University, University of Angers in France and Canberra University and the Adjunct Professor and a Director at Mudra Institute of Communications, Ahmedabad (MICA) in India.

Above all of his academic and professional achievements Ashok’s most prized and precious accomplishment was his family. He married his love Nilanta in 1977 and had three adoring children; Jaimini, Chintan and Reshma. He dedicated his life and time to them ensuring that above all they were loved, supported, educated, well travelled and filled with life experiences. In 2013 he became a grandfather and has 4 adoring grandchildren in Eva, Rivan, Nya and Avie who all loved their Nana and Papa dearly and who will always be blessed to have known him even for a short time.

Ashok lived his life spreading inclusiveness and fighting for his independence from his wider family for his own much loved brood.

The love he has planted throughout his life is evident in those that have had the pleasure to know him and to call him husband, father, grandfather, friend and colleague. His dearest family and many, many friends all over the world. His kindness has touched so many.

Ashoks desire to help others continued to the very end. He has over the years through his passions for swimming, cycling and running raised thousands of pounds for causes that have touched the ones he loved. Losing his father to a heart attack when he was young he has raised money for The British Heart Foundation as well as Alzhiemers and recently for Cancer Research after his much loved wife was diagnosed with Breast Cancer.

Ashok passed away on the 3rd January 2019 after a short battle with Peritoneal Cancer, which eventually spread to other organs. This Cancer is fairly rare in men and is unfortunately only usually detectable at very late stages.

It was his wish that in his passing he try to help others that are affected by this terrible disease.

This donation page is a way of honouring him and his wish to further research this Cancer in the hope it may help others.

He will be missed and always loved.

Funds held for any charitable purpose or purposes relating to the National Health Service wholly or mainly for the services provided by Hampshire Hospitals NHS Foundation Trust.

Charity Registration No. 1060133
Find out more about charity fundraising