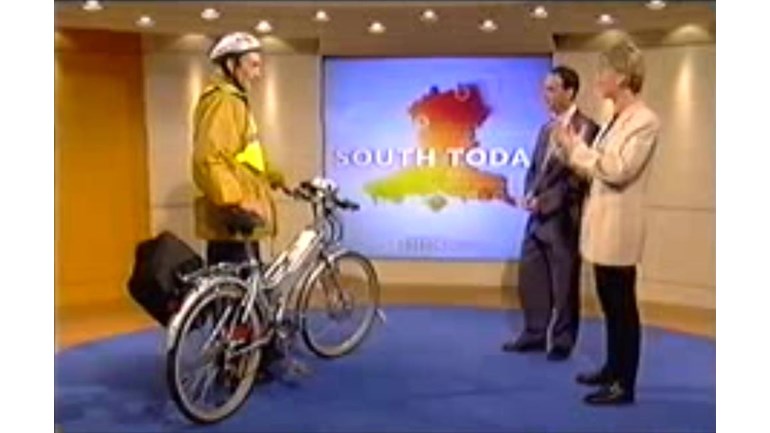 I am commuting to work by e-bike one last time for Brain Tumour Research because the Univ. of Portsmouth does such amazing work.

On 11th January 2001 Sally Taylor and Roger Finn interviewed me on South Today about my unusual commute to work across the Isle of Wight.  I live in Sway near Lymington and had been enduring an unreliable train service via Southampton. My solution was to buy an electric bike and travel across to the Isle of Wight on the Yarmouth ferry, returning to Portsmouth from Fishbourne .  The story went viral!

The highlight of the media coverage was the feature on South Today and my ride-on part in it. You can enjoy it again at https://www.youtube.com/watch?v=VaXN9zMiFUw

“When I started marathon running in 2002, my e-bike commute across the Isle of Wight became impractical. I ran a total of 33 marathons between 2002 and 2015, including sub-3 hours at London in 2010 when I was 56.  I bought a car and drove up and down the M27 to work each day so that I could run regularly with the New Forest Runners and Portsmouth Joggers.   In 2005 I won the Great South Run vet-50 prize and into my 60s expected to maintain my fitness, but was not prepared for what was to happen next.”

“In February 2016 at the age of 62 I was diagnosed as having a rare auto-immune disease, called polyarteritis nodosa or PAN. After weeks in intensive care and months of treatment at Southampton General Hospital, I required ongoing medication and had chronic kidney disease CKD.  I eventually returned to work by car.  My limited physical ability allowed me a blue disability badge so that I could park near my office at the University of Portsmouth.

“When I commuted by e-bike in 2001 electric bicycles were in their infancy and its lead acid battery jextremely heavy. Modern electric bikes are lighter and more powerful, so I am buying a new electric bicycle, so that I can ride my route to work again. Interestingly my colleague Dr Jamie Foster in the Department of Mathematics at the University of Portsmouth is engaged in cutting edge research designed to improve the performance of modern Li-ion batteries”

“Other important research at the University of Portsmouth is carried out by a team led by Prof Geoff Pilkington, who work on brain tumours.  Since I will be 65 and retiring from my work as a mathematics lecture on 9th September, my last day of work will be Friday 7th September 2018. Together with my buddy and electric bike expert David Johnsen, we will be cycling my well established commuting route across the Isle of Wight for one last time.  We will be fundraising for Brain Tumour Research, which helps to support the internationally recognised mwork by Geoff Pilkington’s research group.”

“Brain tumours kill more children and adults under the age of 40 than any other cancer. The MP Tessa Jowell recently died from brain cancer helping to raise awareness of its severity.”