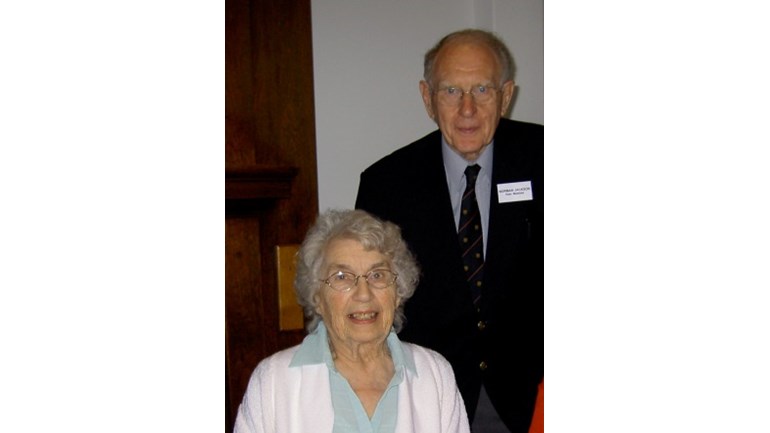 In Memory of Isobel & Norman Jackson

Fundraising for University of Birmingham

The University of Birmingham is committed to finding solutions to global challenges, including cancer, global infection and the development of our future leaders. As one of the broadest reaching charities in the UK, we are tackling issues that affect us all.

You may have heard that Isobel and Norman Jackson have both died in the last twelve months. Isobel and Norman can only be described as ‘stalwarts’ of the University. They both gave generously of their time over several decades to supporting the University and particularly the Guild of Graduates and Alumni Association in its various forms.  Isobel’s principal contribution was made through University House Association.  Isobel lived in House during the war years and then joined the Association, of which she was Secretary for many years, becoming President in 1985, a position she held until her death.  Isobel was an expert on the history of University House and took meticulous care to ensure that documents relating to the founding of House on Hagley Road in 1904 and the building of the present premises in Edgbaston Park Road in 1908 were carefully preserved and kept in the University archives.  Her efforts culminated in the publication of a book covering the entire history of House until its closure as a hall of residence in 2002. She organised many reunions over the years and usually managed to arrange an eminent guest speaker either from the ranks of distinguished former residents of House or the senior officers of the University.  Many will remember these reunions as enjoyable and happy occasions for old friends to gather again in the familiar environment of House. Isobel was always keen to recognise the contributions of others to the life of University House and arranged numerous collections to provide fitting memorials to those who had during their lives given generously of their time, money or influence to make University House a better place for its residents and staff.

Norman graduated in Mathematics in 1942 and returned after war service for his Dip. Ed. In 1947, when he took up a teaching post Bishop Vesey’s Grammar school where he remained until retirement after 34 years, service. He maintained his links with the University and served the Guild of Graduates in various capacities.  He was particularly involved with the Midland Branch, and served as its secretary for a record 19 sessions between 1981 and 2000.  He regularly accompanied Isobel to UHA functions and supported her in her indefatigable work for the Association.

Isobel and Norman both served on the Court of the University, for many years until it was reconstituted and they were among four first Foundation Fellows to be created by the University in 2005 as a mark of respect and gratitude for the contribution they both made to its life and work.

Isobel and Norman met during their time as Undergraduates in the war years but it was not until Norman returned from military service that they got together, marrying in 1949 and setting up home in Boldmere, Sutton Coldfield.

University House Association has had no new members since 2002 when it ceased to be a hall, and is now to be disbanded following Isobel’s death.   The majority of its remaining assets are to be used to support the work of the Cadbury Research Library in maintaining, cataloguing and expanding, where possible, the archive of material relating to University House that Isobel so lovingly assembled during her life. However, before we finally close, we would like to provide a permanent memorial to commemorate the lives of Isobel and Norman.  Suggestions have included a tree in Winterbourne, a place they both loved and where many former Association members and supporters are remembered in the Rose Garden, and a portrait photograph of Isobel in University House itself, to join the existing gallery of past Wardens and Officers of University House Committee already on display.

We hope to commission the memorial at a special, final reunion to be arranged in the spring of 2014.  This appeal will therefore close 28th February 2014 to ensure we have enough time to arrange this event and tailor it to the available funds.

What we are ultimately able to provide depends on you – please give generously to this appeal to ensure that Isobel and Norman are remembered for generations to come.

The University of Birmingham is committed to finding solutions to global challenges, including cancer, global infection and the development of our future leaders. As one of the broadest reaching charities in the UK, we are tackling issues that affect us all.