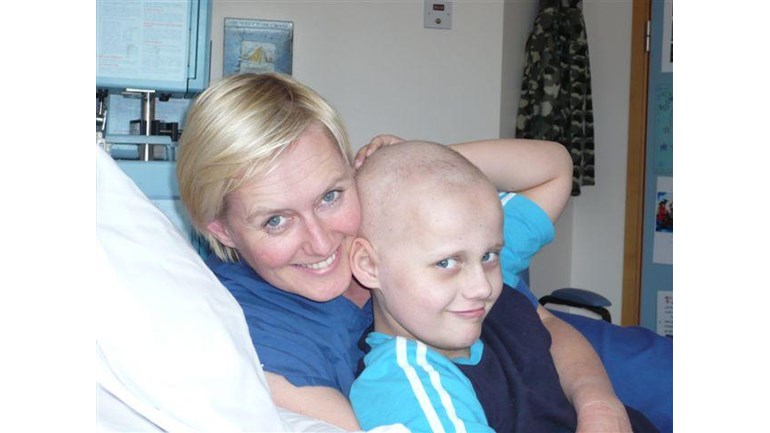 Thank you for visiting my fundraising page for Jack's Star Tribute Fund supporting the Children's Cancer Unit at the Bristol Children's Hospital. I set the fund up through the Wallace & Gromit Grand Appeal in memory of my son, Jack, who died from a rare form of leukaemia on 23 July 2008, he was only 9.  I really hope that Jack's fund has helped make life a little better for all those children I have met over the past years and sadly, for those who will be newly diagnosed in the future.

Many different fundraising events have taken place since July 2008  including cycling, running, walking & swimming events; abseiling & skydiving; ladies, band & quiz nights;  Halloween parties; headshaves; cake bakes; the list goes on and on and it has been truly heartwarming to have had such fantastic support from so many people over so many years.

At the end of 2014 Jack's fund reached a target of £100k, funding the new modern playroom & integrated conservatory on the Children's Cancer Unit - a special place where children can spend time away from their hospital beds and a very fitting legacy to my son.  In 2015 we raised a further £10k towards the refurb of the Unit's kitchen, providing a better level of catering to children undergoing chemo & radiotherapy and £6k for a jukebox for their playroom.  By the end of 2017 Jack's fund had also raised the £70k required to upgrade the 10 isolation rooms on the Bone Marrow Transplant section of the Unit and by March 2018, Jack's Fund had reached over £200k.

Jack's Fund has also provided Wii Fits to encourage children to get out of bed, helping towards their physical recovery following a bone marrow transplant; donations of DVDs and computer games and emergency palliative care bags enabling families to provide end of life care at home.

Through all of this fundraising and support, our most successful initiative has been 'Captain Jack's Treasure Chest', 3 pirate themed toy boxes from which childen can choose a special treat when facing scary and unpleasant medical procedures.  I have had such great comments about the Treasure Chests from both families and the medical team about how they help children through their treatment and this is something that I will ensure Jack's Fund will continue to support for many, many years to come.

Jack was diagnosed with a rare form of leukaemia In November 2003, just aged 4. He underwent chemo and a bone marrow transplant in Feb 2004, for which his brother, Joe, then aged 8, was the donor.

Following his tranplant, Jack remained in remission for over 2 years but in August 2006 he relapsed. He received further chemo from which he developed a life threatening fungal infection on his lungs. Miraculously Jack recovered from this and went on to find out that he was in remission, however the lung infection had left him too weak to undergo a 2nd bone marrow transplant.

For just over a year Jack remained well but following a routine bone marrow test it was confirmed that Jack had relapsed a 2nd time. He had to undergo more chemo and radiotherapy and an unrelated donor was found for his 2nd bone marrow transplant. In May 2008 Jack was admitted for his transplant and spent 2 months in hospital. Jack developed pneumonia and had no immunity to fight anymore, he passed away on 23 July 2008 with myself and his dad beside him, holding his brother's hand.

Through all of this Jack remained a strong character, he had a wicked sense of humour and endless sense of fun. Our home feels so empty and quiet without him and I felt that I needed to do something positive out of something which has brought me and my family so much pain and sadness.  I cannot thank Jack's Drs, Nurses and other hospital staff enough for the care that he received during all the time we spent at the hospital

Cancer is a terrible disease that doesn't care who it takes as its victims.

I cannot tell you how much it means to me when I see how much people have been, and still are, supporting Jack's fund and I would like to say a huge thank you to them all. He was truly a remarkable boy and we miss him every single second of every single day.

Donating through Justgiving is quick, easy and totally secure. It’s also the most efficient way to sponsor me: The Royal Hospital For Children Bristol Appeal Limited gets your money faster and, if you’re a UK taxpayer, Justgiving makes sure 25% in Gift Aid, plus a 3% supplement, are added to your donation.