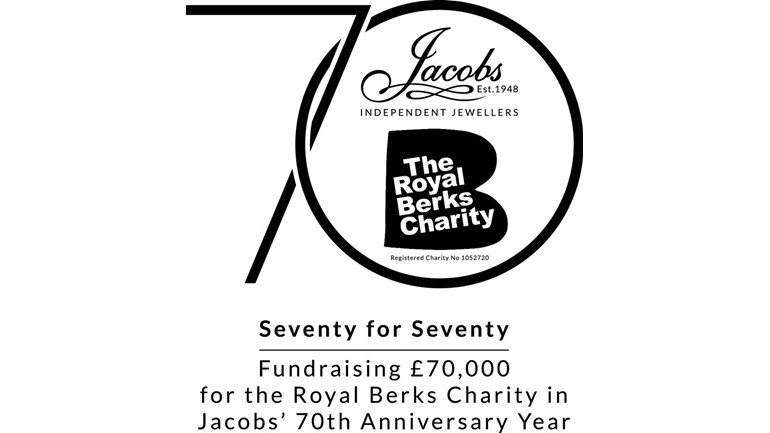 Jacobs the Jewellers: Seventy for Seventy:

Raising £70,000 in our 70th anniversary year for Royal Berks because we want a new Surface Guided Radiotherapy Machine!

During 2018, award winning Jacobs the Jewellers is delighted to celebrate our 70th anniversary. Entirely in keeping with a family business holding the Reading community at its heart, our anniversary centres around the ambitious goal of raising £70,000 for the Royal Berkshire Hospital Charity in the 70th anniversary of the founding of the NHS.

Events wise, a team of “Jacobs Jumpers” skydived in April raising £8232, a golf day will be held in late September,  soap box derby,  and the program will include a gala luxury black tie event in October.  Initiatives running in parallel include every 2018 purchase completed being entered into a prize draw to win a 0.70ct diamond 18ct white gold pendant, worth over £4000. Furthermore, special 70th anniversary raffle tickets will be available to buy in store to win prizes, drawn each quarter. The prizes will be a unique mix from Jacobs own watch, jewellery and gift partners, as well as local businesses – proceeds going to the Royal Berkshire Hospital Charity.

In an innovative final initiative, Jacobs in house designers and goldsmiths will also be designing and making 7 unique jewellery pieces, designed in the style of a specific jewellery design era such as Art Deco or Victoriana. These 7 designs, ranging from £500 to £10,000, will be created and sold during the course of 2018 with a percentage donated towards the charity. One of the designs will be created via a competition with local schools for children 14 years and older facilitated by Jelly, Reading’s award winning arts charity, leading to the winner’s idea being made into a real pendant for sale towards the fundraising.

The Royal Berks Charity helps provide the extras that make a difference to patients, their visitors and our staff. Donations help to improve facilities for patients and visitors; help to buy the most up to date equipment; improve staff training and welfare, and support refurbishment projects.

Charity Registration No. 1052720
Find out more about charity fundraising