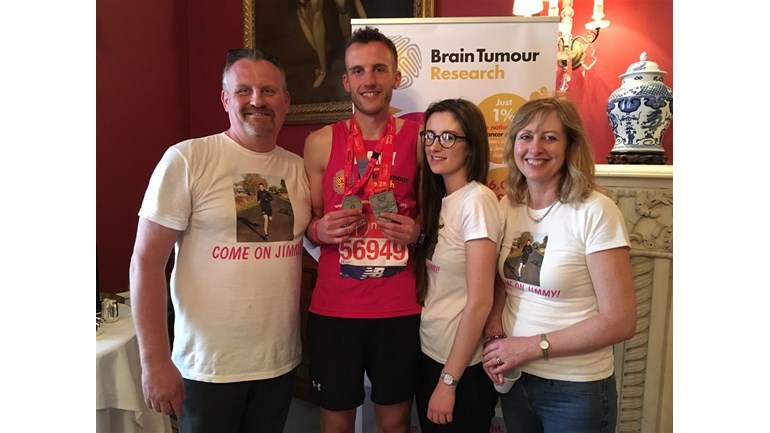 After running the London Marathon 2018 for Brain Tumour Research, I will now be continuing my support of this amazing charity by participating in the Great North Run on 9th September 2018! The support and generosity we received for the marathon was beyond overwhelming, and something I shall never forget! I’m truly grateful, and therefore understand if those that have donated previously do not wish to donate again. However, for those that wish to donate to this page, your money will be going to a highly underfunded cause. Together we can find a cure!

For those that aren’t aware of my story, here is why I am fundraising:

During the night of 14th February 2016, I awoke to the most terrifying experience of my life; with my body out of control, I was paralysed and unable to call out for help. I then lost consciousness and woke up several hours later feeling very confused, and my tongue had been severely bitten. I wondered what had happened to me. I went to the doctor’s to try and get an explanation, and a week later was told over the phone that it was ‘just sleep paralysis’.

Three months later, I went through the same scary experience again so decided that I needed to get a second opinion. I made an appointment at the walk-in centre in Sheffield and was advised by a doctor to travel home to Leicester for an MRI scan. Following the scan, I received a phone call that night asking me to return to the hospital immediately.

A further MRI scan revealed that I have a rare dysembryoplastic neuroepithelial tumour (DNET) in the right parasagittal region of my brain’s frontal lobe. It then became clear that it was not sleep paralysis I had experienced, but epileptic seizures which had been caused by my brain tumour. My family and I were completely shocked. I was only 19 years old when I was diagnosed, and I was otherwise a fit and healthy student.

I was immediately put on medication to control my seizures, and although this stopped me from having a major epileptic fit for a time, I was still getting focal seizures that left my left leg out of control. The drugs were also causing side effects, including lymphangitis that required numerous trips to the hospital for IV antibiotics. Due to the many variations of epilepsy, the process of finding a suitable medication has been one of trial and error.

I had my third and most recent major seizure in the summer of 2017. On this occasion, I was fortunately able to call for help before losing consciousness once more. My parents found me shaking uncontrollably with my head repeatedly banging against the wall. My teeth were clenched down on my tongue, my face was purple and my breathing very heavy. I woke up 30 minutes later to two paramedics at the foot of my bed. For a while I had no idea where I was, or why the paramedics were there. Again, this seizure left me confused and tired for a number of days after.

Aside from the physical effects of my tumour, including the epileptic seizures, it has also had an effect on other areas of my life. For instance, it has had a significant psychological impact on the lives of my family and I. Furthermore, my driving license was taken away for a year, and I can no longer study past 8pm.

Although my new drugs appear to be working, I have been told that I may have to face surgery in the future to remove the tumour. However, this would not be a straight forward procedure, and could leave me with permanent damage, or worse.

Though it is thought that my tumour will remain benign, current technology does not allow us to be certain of this. As a result, I will continue to have MRI scans on an annual basis.

While my brain tumour has had a big effect on my own life, they also affect many other individuals across the country in a wide variety of ways. Here are some facts:

Brain Tumour Research is the only UK charity dedicated specifically to the diagnosis, treatment, and support of this disease. I am running the Great North Run 2018 for the thousands of families directly affected by brain tumours, in the hope that we will soon find a cure to this devastating disease.

So, do you want to do something incredible? Any donation, no matter how small or large, will go directly to finding a cure. Please give what you can.