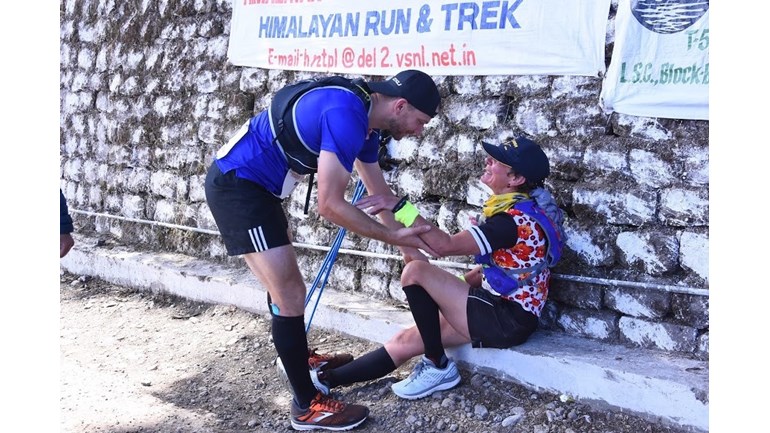 We provide basic essentials to remote communities in Peru and Nepal

The race, is described as the most spectacular running course in
the World, with views of Mt Everest, Lhotse, Makalu and Kanchenjunga. There are 5 daily stages – 24 miles, 20 miles, 26.2 miles Everest Challenge Marathon, 13 miles and 17 miles.  With over 10,000 feet of altitude gain.  The race starts and finishes at Maneybhanjang, in the Darjeeling District of West Bengal.  The route is on trails and traverses isolated jungle, pine forests, small settlements, villages and across major rivers.

I had been competing at British, European and International level as part of the GBR Age Group team at Standard Distance (10k run, 40k bike, 5k run) Duathlon for 5 years.

As I am 67 this year, I decided I needed a big running challenge.  This fitted the bill perfectly!  Since I started running at 47, the Himalaya
100 had been a goal but I had started to believe it was too late as I haven’t done much long distance, ultra-stuff and certainly not lately.

However, last year, some members of my running club, Matlock
AC - www.matlockac.org.uk - decided to raise money for dementia sufferers by running 28 miles on the Limestone Way from Castleton to Matlock.   I have been fell running for years but was only running about 16 miles per week.  However, I completed the challenge in 6.5 hours, although my hips knew all about it, but I was sure that with proper training the body would adapt.

In December 2018 I entered the race to raise funds for LED - Light Education Development… https://lighteducationdevelopment.org.  My Yoga Teacher, Phillipa Wilson, supports this charity, and has trekked with its founder Val Pitkethly.  What we like is that every penny given to LED will go towards providing low-tech solutions to 3 basic needs: affordable and sustainable solar lighting, basic education and essential healthcare.  The charity is run by volunteers and their work in Peru and Nepal is financed by fundraisers like me. Because of the location of the run and the links through Phillipa with LED it seemed fitting to support them.

Since 2004, LED has supplied solar lighting units to over 4000 families.
They not only supply, but they go back and replace and repair as
necessary. Educational supplies have been donated to over 20 schools. In Nepal’s Manasalu region,they have supported Samagaon school since it was built in 2010…providing school supplies for the entire year, every year, together with sports equipment and science equipment.

LED's mission is to provide low-tech solutions to 3 basic needs: affordable lighting, basic education and essential healthcare. Led by the inspiring Val Pitkethly, we focus on the remote communities of Nepal and Peru.

Charity Registration No. 1141243
Find out more about charity fundraising