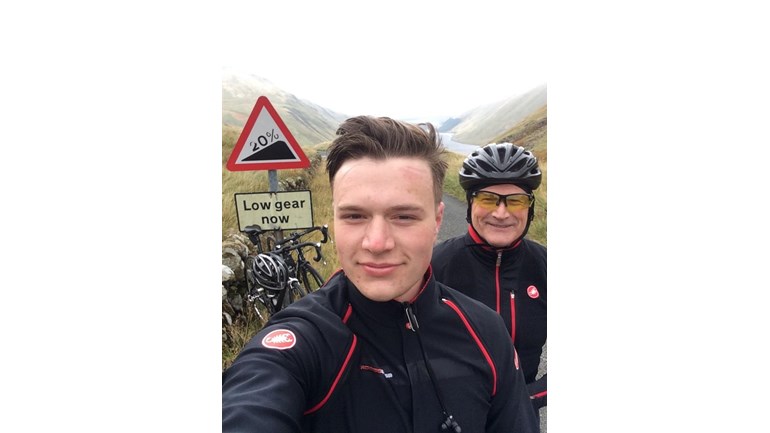 We're riding the Tour o the Borders for Kidney Research UK because we want to give something back for their support.

Joseph was a physically fit and active young guy when out of the blue last July he became quite ill, was diagnosed with end stage kidney failure and commenced a life-saving but physically draining routine of 4 hour dialysis sessions 3 times per week.

As a consequence, one of the many sacrifices for Joseph included him and his dad, Tim, being unable to participate in the September 2018 Tour o the Borders, a 74 mile bike ride over some of the most challenging hills of the beautiful Tweeddale countryside, a ride that they had completed together several times over the past years.

Fortunately, it turned out that Tim was a good tissue match for Joseph and so within 7 months both were recovering from a kidney transplant operation . The transplant has enabled Joseph to regain a more normal life so that after just a further 6 months Joseph and Tim will be returning to take on the challenge of the Tour o the Borders. They are both thankful for their good health and kidney function and grateful for the fantastic work of the many talented and dedicated staff of the renal, dialysis and transplant units of the NHS. These teams have benefited from many years of pioneering research, much of which is supported by the charity Kidney Research UK.

Joseph & Tim are amongst the lucky ones who are of good general health, largely due to their love of cycling & participating in events such as the Tour o the Borders, so they were in relatively good shape and a good match for an early transplant. There are over three million people in the UK with varying degrees of kidney failure, many of whom are not so fortunate and over 6,000 of them are waiting for a suitable transplant. Joseph and Tim would therefore like to celebrate their own good health by raising funds to support the great work of Kidney Research UK from which they have benefited significantly. Please give generously.