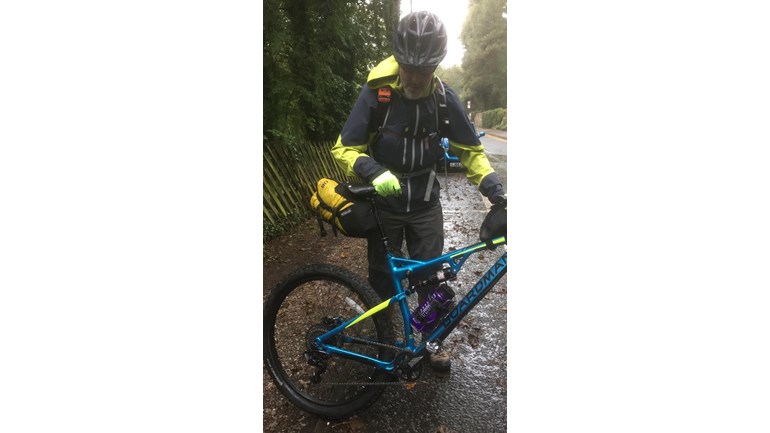 All finished. What a week! Rain rain and more rain. Thank you to all my sponsors for their generous donations. Met up with Sarah and her parents Helen & Simon midway at the Diggle Hotel for fish & chips. A special thank you to them for their support and their present of an ornamental pedals and bicycle chainwheel. Very Yorkshire!

In 2018 our daughter's flat mate Sarah was taken ill with an assumed exacerbation of her chronic asthma. During one particular night a 999 emergency ambulance crew attended and what was thought to be a severe decompensating asthma attack was not the whole story.

Thanks to the prompt attention of the staff at the Royal London Hospital  and a spell in ITU Sarah was diagnosed with Granulomatosis with Polyangiitis (GPA) (Formerly called Wegeners Granulomatosis).﻿

What is Granulomatosis with Polyangiitis?

GPA is a type of primary systemic ANCA associated vasculitis (AAV). It is the most common type of this group of vasculitis diseases. It usually affects the kidneys, lungs, ears, nose and sinuses. GPA is characterised by inflammation of the small blood vessels including the capillaries.

It is most common in middle aged and elderly people but can affect young adults and children. It affects men and women equally.

What is the aetiology (cause)?

The cause of GPA is not yet known. Some research suggests that GPA may be triggered by exposure to silica or to infection with staphylococcus aureus bacteria though this is not proven.

What are the symptoms?

The disease can present in very different ways in different people depending on the severity and the organs involved. It is not uncommon for patients to have had mild symptoms for months or even years before seeing a doctor at all.

Common general symptoms include tiredness, loss of appetite and aching muscles and joints.

It is very common for GPA to affect the ears, nose and sinuses causing blocked nose with some bleeding, crusts and blood clots. Deafness is also very common due to inflammation in the ears as is pain in face or headaches due to sinus inflammation. The eyes can also be involved

In some patients the kidneys can be severely affected which leads patients to go to a doctor with symptoms of kidney disease.

Other common symptoms include:

(hotness, pins and needles or "electric shocks") and rarely paralysis or stroke

As in other types of vasculitis there is no single test which confirms the diagnosis. The diagnosis will depend on the doctor recognising the pattern of symptoms and examination findings. Blood tests usually show evidence of inflammation. The blood tests for ANCA are usually positive which help support the diagnosis but are not specific for GPA or vasculitis A biopsy of the affected organ (if readily accessible) may be helpful in confirming the diagnosis The affected organ may not always be readily conducive to a biopsy. For example brain or eye involvement are best not biopsied, whereas kidney or nose involvement are easily biopsied. GPA can often present with nonspecific symptoms of unwellness, fever, malaise and may mimic infections, making it difficult to diagnose. If the lungs are primarily affected it is not uncommon for the disease to be mistaken for lung cancer, pneumonia or TB.

Cyclophosphamide in combination with glucocorticoid (steroids) is the mainstay of treatment in most cases. In specific circumstances, methotrexate or mycophenolate mofetil may be substituted for cyclophosphamide. For patients in reproductive ages and for other situations where there are contraindications to the use of cyclophosphamide, your doctor may choose to use rituximab. If the disease is very severe large doses of methylprednisolone or plasmapheresis (plasma exchange) may also be given. When the disease becomes quiet, less toxic drugs are used to keep control which include: azathioprine, methotrexate and mycophenolate mofetil. In patients where initial treatment was with rituximab, it may be continued in a smaller dose at 4-6 monthly intervals. The prednisolone will be tapered slowly over time with a view to coming off the steroid completely. In some cases, this may not be possible and a low-dose of prednisolone may have to be continued long-term The treatment will be continued for at least two years after the onset of remission after which it may be appropriate to start reducing it in certain cases.

Copied by permission from Vasculitis UK

Vasculitis UK provides support, advice and information to those suffering from vasculitis and their families. VUK also sponsors research into the causes and treatment of vasculitis and works to raise general awareness of ALL types of vasculitis. VUK is run by volunteers who all have vasculitis.

Charity Registration No. 1180473
Find out more about charity fundraising