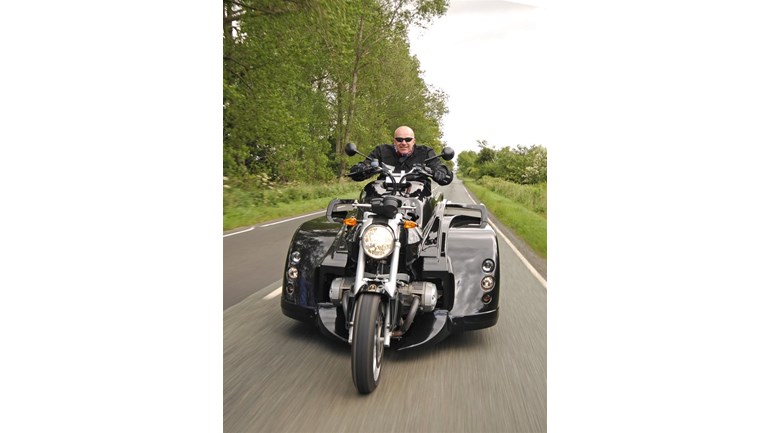 riding across Britain on my wheelchair trike for Percy Hedley Foundation because they transform the lives of disabled people.

We support disabled people to live their lives to the full

JOGLE '14 is David Burdus' John O'Groats to Land's End and back 'wheelchair motor trike ride' in aid of the Percy Hedley Foundation, http://www.percyhedley.org.uk/.

Aged 21, David Burdus severed his spinal cord in a motorcycle accident, leaving him paralysed from the waist down. His biking days were over... until he came across the revolutionary Conquest Trike 25 years later, in 2008!

Back in the saddle and born again, David drove a 'loan' Conquest 1200cc from Conquest Motorcycles in the Edinburgh to Berlin stage of Transglobemoto in May 2009; a 9 day 1600 mile 'landmark trip in his life' helped by Scotsmen, Tom McInally and John Boyle. It was an emotional experience for David, holding very special memories.

In 2013, thanks to a generous benefactor, David became the owner of his very own Conquest 1150cc trike and is planning a 2,500 mile free-wheeling road trip in August 2014, this time a home-based trip through Scotland and England.

Coincidentally, in 2013, David became a trustee of the Percy Hedley Foundation, establshed in 1953, which provides education, opportunities and services to children, young people and adults with a diverse range of impairments including cerebral palsy, seneory and communication impairments.

Said David, "Wherever I go, when this monster (the trike) approaches, all heads turn and it becomes the centre of attention. So... I thought, it would be crazy not to use my road trip as a fund raiser for the fantastic Percy Hedley Foundation".

For over 65 years Percy Hedley has been giving care, education and support to thousands of disabled people across the North East. With your support we will continue transforming lives.