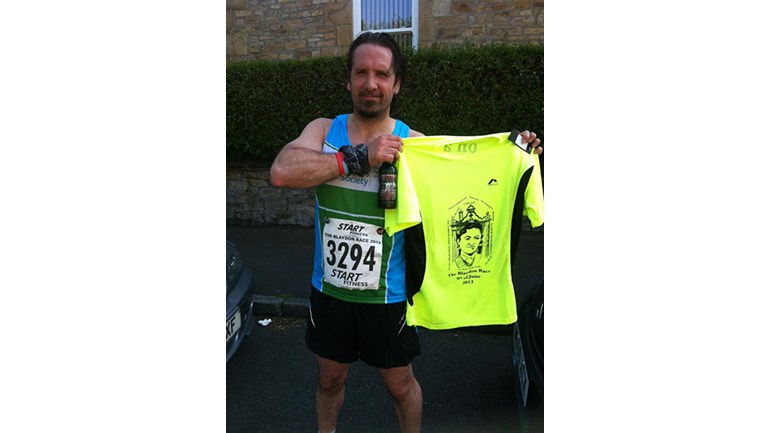 John is continuing his fundraising for Alzheimers Research but rather than a series of 10k runs this year he's branching out into various specific events and challenges. This panel will update as new plans come into play, so watch this space for the latest news! John's last event was Edinburgh's first ever ultra urban marathon...and John's longest race to date (see 'Past Events/2017'). John continues this year to expand his sponsored events to include new and more challenging endeavours. In that spirit, his first event for 2018 will be another (bigger and better) ultra... THE WALL!

The Wall is a one day, 69 mile (111km) run that follows in the footsteps of Britain’s Roman past, along Hadrian’s Wall from Carlisle Castle in Cumbria to Baltic Square in Newcastle-upon-Tyne. The route through the stunning scenery of Northumberland includes off-road and on-road terrain and passes a number of tourist attractions such as Lanercost Priory and the market town of Hexham. This will be John's longest run by far - it's double the length of his last race (the Edinburgh Ultra) and includes 20% off road terrain.

Sponsor John as he pushes himself to his limits and beyond for Alzheimer's Research.

All my fundraising so far has been for Alzheimer's Research, and the reason for this is very personal to me.  In December 2015 I lost my mum, Leane Grimshaw, to Alzheimer's.  She had fought the disease for many years, but I would like her to be remembered for the amazing woman she was, not just for her illness.

Leane was a loyal wife, a warm and loving mum of three, a grandma and great grandma.  She was an artist, a natural healer and a Rosicrucian.  Her interest in the ‘metaphysical’ extended through much of her life, starting with an interest in homeopathy and herbal remedies and progressing to her involvement with the Rosicrucians, a community of mystics who study and practice the metaphysical laws governing the universe.  She also qualified and worked briefly as a hypnotherapist and also studied astrology and astrological charts.

Leane started life in the tiny village of Patrick Brompton in Yorkshire, where she spent a happy childhood in and the surrounding rural countryside.  After she left school, she worked for about 5 years at the Ministry of Agriculture Animal Health Department as a Clerical Assistant before she met and married her husband of 58 years, Frank Grimshaw.  She had three children in less than four years and spent the next fifteen years or so raising them, before her interests started to develop in artistic and then metaphysical endeavours.  She started making her own pressed flower pictures as her children became teenagers, then began giving talks on how to make them to local WI groups.  She also began using homeopathy, long before it was ‘trendy’, and became very interested in alternative healing.  Not long after she heard about the Rosicrucians, and joined the UK branch of the organisation.

As part of the Rosicrucians, she learned ‘natural healing’ techniques, for which she was in high demand. All her children and grandchildren knew about her skills as a natural healer and phone calls were frequent asking for ‘healing please’.  Her family and close friends had so
many anecdotes of Leane’s healing causing positive outcomes that most of us had no doubt it worked – even if we had no idea how!

After her children grew up, Leane also was a keen volunteer for many years.  She was very involved in Adult Literacy
and helped many adults learn to read and enjoy books as she did herself (her own library grew to over 300 books!) and she also volunteered with people with terminal cancer, supporting them in the last days of their lives.

In her later years Leane was active in the national Rosicrucians, using her skills to become a popular speaker and workshop leader at conferences and gatherings in the UK and internationally.

Her confidence in her own abilities despite all her accomplishments was still at times fragile, and she often had to be convinced to accept invitations to speak, but without exception she was always received extremely warmly and developed a reputation as an exemplary and knowledgeable speaker/leader.

Leane will be remembered affectionately by the very many people she touched during her 78 years, but most of all by her family who will always remember her smile, her laugh, her hugs and her passion for being the best wife and mum that she could be.