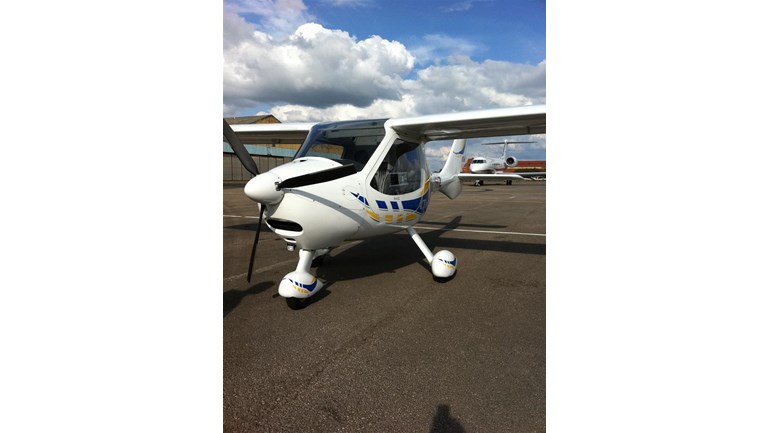 Just trying to raise money for a good cause !

We raise money for research, care & support to help cancer patients get the best care.

My plan was to fly around the world in a very light aircraft (classed in the UK as a Microlight) in order to raise money for my chosen Cancer charity.

I set off in May 2016 (without knowing if the Japanese would let me through) and unfortunately only got as far as the Middle East. Temperatures in excess of 40c (occasionally higher inside the aircraft) caused a few problems and the final straw (after the propeller stopped spinning above the desert, but before the urine infection and the disorientating dehydration) was ongoing worries about the aircraft battery dying which would have led to the flight instruments & navigation kit going bye byes.

There were more airborne anxieties revolving around Vapour lock, the Fuel Pump failing and something called "Pre-ignition", which cracks open the engine. None of these are ideal when you're above a desert.

To complicate matters the region was experiencing a mini heatwave (not to mention it's nearly a war zone) and my next stop was India where folk were dying in temperatures beyond 50c. So discretion being the better part of valour, I turned around and flew home.

With everything hopefully you'll get the impression that I'm a reasonably experienced flyer. I am not a commercial pilot though, I just fly for fun.

Each month I'm putting a certain amount of money aside to fund Charity Flights. I'm paying for all the costs. ie. fuel, maintenance, insurance and landing fees, etc.

I can not take cash, or payments in kind, from anyone. All donations need to go through this site. Your flight will be completely at my expense. ie. it’ll cost me approx’ £30 to fly you around for an hour... in the hope you then donate any sum you feel comfortable with to this Cancer Charity.

I started flying at the age of 22 and got a US Pilots licence in Missouri. I was offered a job as a trainee Crop Spraying pilot but having seen two Boeing Stearmans, that'd hit telegraph poles, I binned the idea.

By the age of 31 I'd saved enough money to do a US Commercial course so I could fly in Africa. Unfortunately a lady got in the way, as they do, and I ended up swapping my licences around so I could come home. I picked up a UK night rating, IMC rating and Multi Engine* rating whilst in Florida.

During that time I flew a Cessna through the Bermuda Triangle and onto the Bahamas. Landed a couple of times at Orlando International (man or woman, that experience will put hairs on your chest) and was cleared to fly along the runway at Cape Canaveral (where the Space Shuttle used to land). It was past midnight, pitch black and hugely, majorly, exciting.

Unfortunately I picked up a Corneal Ulcer and reluctantly gave up on on Commercial Aviation in favour of finding a 'proper job'. The ulcer came and went for about 5 years.

My current aircraft is called G-CGIZ and she's classed as a Microlight. Some folk laugh at the name GIZ, but it gives her character.

Oh, yes, and I've crashed her. This is the starting point of the new book I'm slowly writing.

There's pictures of my 2012 trip to the Alps here. Additionally there’s a few snaps of myself and David Gaskell competing in the 2012 Round Britain Microlight Rally.

In 2013 India Zulu & I flew to North America and the snaps are here, Canadian Adventure. I'm told I'm the first person to take a Microlight from the UK to Canada... and come back.

The story of the flight (I hated every single minute) is available to buy on Amazon. If you're interested please search for "Decision Height by Jon Hilton". The online edition costs £4.79 and all the royalties (approx £1.24) go to the charity. The language in the book is my own and it's occasionally "colourful". ie. I went through hell.

I don't have pictures of everyone who's been aloft but there's a few pic's in the album, Aviators.

If you want to hear me you could head to www.flyingpodcast.co.uk. A very nice chap thought it might be worth recording me. I believe I'm episode 58 and it covers The Round Britain Rally, The Alps & the Feeter incident. As of November '13 approximately 1,500 folk have listened worldwide.

There's also a follow up Podcast covering Canada (episode 69). It's not quite as cheerful because I was scared witless most of the time. Add into the equation that my lovely little daughter kept me awake the night before the recording and I sound incredibly boring (although I do cheer up halfway through).

If you're thinking of flying and wonder what it's like, I have two videos for you. The first is a landing at a place called Sywell. Quite a gentle affair, although the runway's quite flat and that flatters my work a little... Sywell landing on Youtube.

One last video was taken of a landing at Glenforsa on the Isle of Mull in April 2013. Gusty crosswind, a lot of "sink" before the threshold, awkward geese. After we'd landed the airfield owner came over and asked which airline I flew for. Cheered me up no end. Enjoy.... Glenforsa.

There's a general collection of snaps at GIZ World Tour. The photo's are a generic look at all my flying experiences in the aircraft.

I've won a few flying awards, too. ie. the GPS category of the Round Britain Microlight Rally (as above), the BMAA Chairman’s Trophy and the Britannia Trophy courtesy of the Royal Aero Club.

I've flown a few folk around now and they've understandly wanted to know a little bit about me.

I'm just an ordinary person who's managed to cram in the Berlin, Paris, New York, Moscow, Reykjavik, Los Angeles and Sahara Marathons. I finished the San Diego Triathlon, the English and Korean Iron Man things (damn silly name), completed a relay swim across the Channel and ran the bulls at Pamplona. I've had brief stabs at freefall parachuting (none of this tandem malarkey) and hang gliding.

Courtesy of a lack of funds, this was a while ago, I had to sleep rough in Berlin, Paris and Pamplona. Doing something like this makes you appreciate life's luxuries so much more than I can explain. May I suggest that buying a '£3 meal deal' for a homeless person is good for the soul.

I did a Bike ride around Beijing and raised £1,500 for Mencap.

For the last ten years I've had a Black Belt in Ju Jitzu. Unfortunately it hurts a tad being bounced all over the place so I'll probably let this slowly fade into my past.

I've been a Tunnel Engineer, Mortgage Broker and IFA. Courtesy of abandoning my flying career the first job I could find, upon returning to the UK, was in the lighting industry.

I helped put 4 no. 7 KW rotating Xenon Searchlights (Moonrakers) on top of the Eiffel Tower. It’s a boring story but I generated the mail shot that attracted the French, drove the demo Searchlight through the Channel Tunnel, did the test at the end of Paris Charles De Gaulle Airport, negotiated the deal and then threatened to resign when my employers wouldn’t accept the order. Twenty years later the kit is still there... which I’m quite proud of. And I was instrumental in winning the contract and project managing the lighting on the "Wobbly Millennium Bridge" across the Thames. Both incredibly sexy projects.

I'm not rich, but I'm not poor. I live in a nice little cottage and have a wonderful 7 year old daughter (2018). I'm quite a cheerful chap, but tend to speak my mind when challenged.

In conclusion there was maybe a time when I was a thrill seeker but I'm hoping my future offers nothing more than lovely boredom... with a little local flying thrown in for good measure.

* I passed the IMC and Multi Engine written & flight tests but, at the time, couldn't afford to get the licences issued.

Thank you for helping patients at The Clatterbridge Cancer Centre, young and old, get the best possible care. With your support, we can fund pioneering research, the latest cancer treatments & vital services - ranging from new innovations to the special touches that help to change lives.