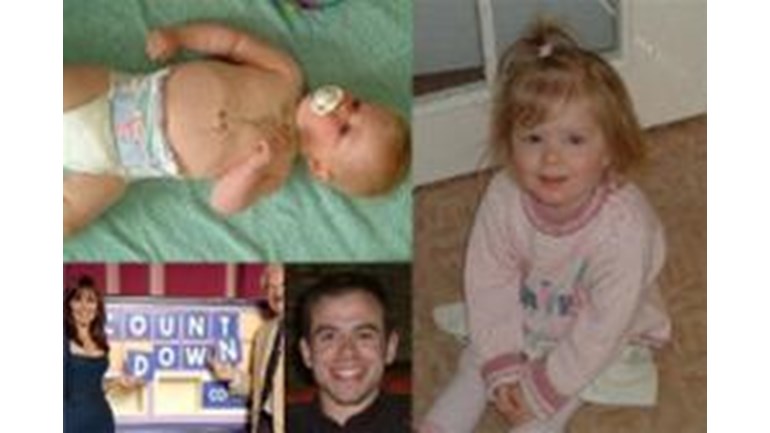 Well there you go, it's all over now.  Well not quite actually, but more on that a little later.  If you've been a regular visitor to this page, you'll already be aware that I completed my first run on Countdown by winning eight shows to become an 'octochamp' and qualifying for the series finals as number two seed with an accumulated total of 856 points (including the series record score in one show of 128!)

I had a great time filming the first lot of shows, which I gushed about on this very page, but I would say the finals eclipsed even that.  The atmosphere was very different, it felt as if the pressure was off a bit, probably as everybody already felt they'd achieved a great deal by getting this far.  Everybody played with a fantastic attitude and spirit, and it was a pleasure to spend two days in their company.  Here they all are in the green room, which you'll notice is actually a sort of orange colour.

I was seeded to meet 14 year old Countdown whizzkid Conor Travers in the grand final, but alas it wasn't to be, as I lost in the semi-final to Matt having narrowly edged past Christine in the quarter-final, both games going to crucial conundrums.  When I say 'alas' there, I actually mean 'thankfully', as he would have most likely thrashed me.  We did actually play a game in the hotel bar, the result of which you can see here.  (The excellent piece of software you see in the picture is the game I wrote, as mentioned by Des on TV.  All donators are entitled to a copy, mail me at jon_corby@yahoo.co.uk !)

After filming, we had a bit of a drink in the TV centre bar with Des and Carol, and the series producer Damian.  Unfortunately Susie didn't stop for a drink as she had to rush straight off, so here is the same picture of us as before.  Here's a pic of me, Dan and Conor, and one of me gaining revenge for my semi-final defeat at the hands of Matt by getting close to his fiancee behind his back...

As I said earlier, it may not be all over just yet.  There is currently a Countdown Champion of Champions tournament running, which pits all the best contestants of the last few years against each other in a knockout competition.  Unfortunately for me, the invites for this were apparently sent out the week before I filmed my first lot of shows, so they've included the top three seeds at that time from my series (Conor, Matt and Paul).  However, Damian assured me that as the eventual number 2 seed (and semi-finalist) I would be invited back for the next Champion of Champions, which will be in about 3 years time or so....

Finally (well nearly) and most importantly, the reason for the existence of this page: My youngest daughter, Ellie (pictured top-left: post-op and now) was born with Fallot's Tetralogy, a combination of four heart defects which is eventually fatal if left untreated.  This whole fundraiser is an enormous thank you to the fantastic, skilled, dedicated staff at Great Ormond Street Hospital who successfully operated on and subsequently nursed little Ellie back to health.  (Not to mention looking after her parents.)

Plus, of course, massive thanks to all the fantastic people listed below who obviously agree with me what a worthy cause this is.  I cannot believe how generous everybody has been, which has actually led to a bit of an embarrassing situation - the filming was all completed before this all really took off, so the scant mention that I gave it on the programme now seems very inadequate and ungrateful.  Thanks to family, friends, work colleagues (past and present), members of the c4countdown yahoo group, but a particularly special mention must go to the big-hearted gentlemen (and ladies) of the Football365 Forum, who have supported both me and the hospital in some style.  Awooga!

---------
Donating through this site is simple, fast and totally secure. It is also the most efficient way to sponsor me: Great Ormond Street Hospital Children's Charity will receive your money faster and, if you are a UK taxpayer, an extra 28% in tax will be added to your gift at no cost to you.