Joseph Thompson
Fundraising for The Christie 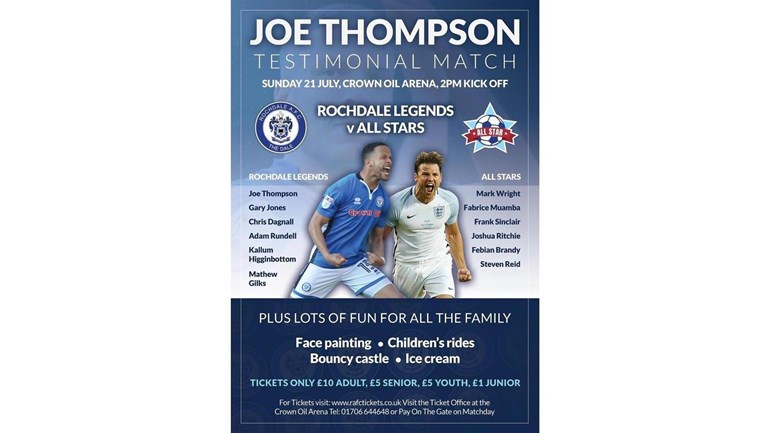 Welcome to my ‘Benefit match’ in aid of The Christie Charity at my second home, the Crown Oil arena here at Spotland.

I and many others wouldn’t be here today without the wonderful work that everyone at The Christie hospital does and do it’s fantastic to be able to put on today’s game to raise both money and awareness for their cause.

I’d like to thank everyone involved in today’s game with a special thanks to all the players that have agreed to take part including many close friends, Dale Legends past and present as well as a host of celebrity faces such as Mark Wright, Joshua Ritchie, Joleon Lescott, Fabrice Muamba and many more.

I’d also like to thanks my family, friends and all the staff at Rochdale for their support and to you the Dale fans for your love over the years. It is appreciated.

Back in October 2013,  I was diagnosed with stage 4s Hodgkins Lymphoma, a rare form of blood cancer. I was a professional footballer playing for Tranmere Rovers at the time. After 6 months and 12 cycles of intense chemotherapy at The Christie I was thankfully put into remission and after some rest, post treatment, I was allowed to pursue my dreams of playing football again.

On Christmas Eve three years later I was told I had relapsed and the cancer had come back. In early 2017 I underwent 2 long cycles of gruelling chemotherapy followed by a Stem Cell Transplant which involved 3 weeks in insolation living on machines.

Although the treatment had taken its toll on me physically I was given the best news by the specialist that I was cancer free. The relief my family felt was incredible. The footballing world had supported me and family through it all. Rochdale Football Club and the fans were amazing too.

But I still had one dream that I wanted to live out. To score one last goal. I was able to do that scoring a crucial goal that kept Rochdale in League One on the final day of the season.

The reason I’ve organised this game for The Christie is because I know first hand all the amazing work that everybody does in the fight against cancer. I can never repay the debt but I can help others in the future. So a lot of the proceeds today will be going directly to support them.

So it’s my time to give back!!! I can never pay the debt back for saving my life but if I can help someone else in the future I will.