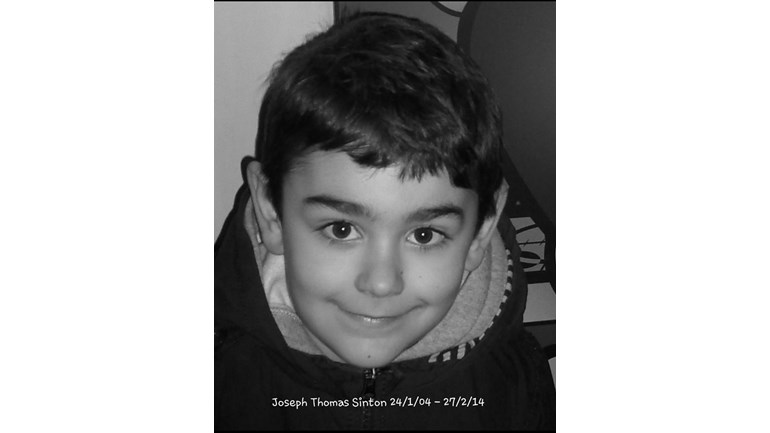 Raising money in memory of Joseph for Future Fund - Newcastle University because every child deserves a future free from cancer.

Our beautiful little boy, Joseph, was diagnosed with an aggressive brain tumour in December 2010 following a 2 week history of headaches and vomiting. Life as we knew it ended. Joseph underwent gruelling treatment including several visits to theatre, 6 weeks of daily radiotherapy and 4 cycles of intense chemotherapy with stem cell replacement, finishing his treatment in July 2011.

End of treatment scans showed Joseph to be free of cancer and we tried to get back to living life as 'normally' as we could. It was always at the back of our minds that Joseph could develop further health problems as a result of his treatment, our worst fear though was that his cancer could return.

Joseph was scanned regularly and his scan in February 2013 was clear. Joseph had started on daily growth hormone injections and was growing well. His thyroid gland had also been affected by the treatment and he was started on a daily dose of Thyroxine.

The day after he began his new medication, Joseph vomited. We put that down to the tablets. A few days later and he vomited again, we put that down to something he'd eaten. Over the next few weeks we became increasingly concerned by occasional vomiting and headaches so took Joseph back to see his consultant. All of his observations were fine. The next day, Joseph collapsed at home. He was admitted to hospital and an MRI scan confirmed our worst fears, not only had Joseph's cancer returned, it had spread into his brain and around his spinal cord, there was no cure.

We were given the heartbreaking decision to be made of :- doing nothing and letting the tumour take our little boy, giving oral chemo which meant we could be at home together as a family or visiting hospital for 5 days at a time for IV chemo.

We couldn't just do nothing. Joseph was started on a course of oral chemotherapy to try to keep the tumour at bay for as long as possible and to enable us to spend as much quality family time together as we could.

Joseph fought his battle with such bravery and always with a smile on his face, showing immense courage for someone so young. Each day we were given was a blessing but Joseph gradually became immobile, robbed of his childhood and ultimately of his life which he had battled so hard to hold on to. Joseph died peacefully at home on 27th February 2014. He had just turned 10 years old.

Our beautiful little boy has made us incredibly proud. Joseph touched the hearts of everyone he met with his huge personality, strength, courage, humour and determination. Joseph continues to be our inspiration and our strength to carry on.

In memory of Joseph, we have decided to raise much needed funds for Childhood Cancer Research and have chosen the Future Fund, a collaboration between Newcastle University, the Great North Children's hospital who took such fantastic care of Joseph and North East Children's Cancer Research (NECCR), to support.