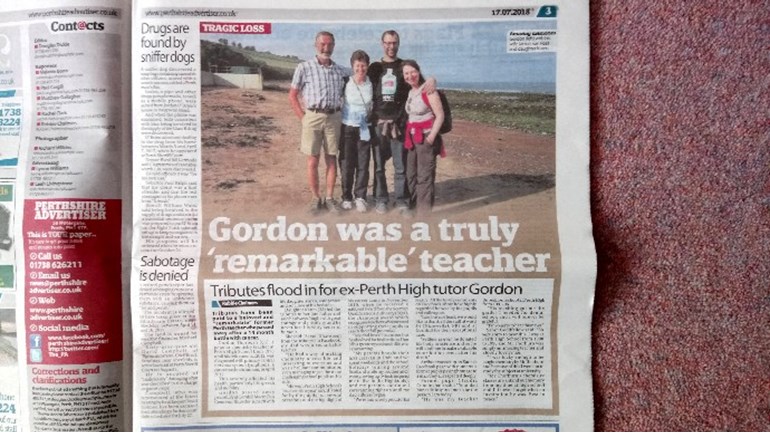 Karen's 55 Miles Around the Black Isle

Nothing could have prepared me for the heartbreaking news that one of the people I love most in the world had primary central nervous system lymphoma; a cancerous brain tumour. On 30th April 2017 I sat with my head in my hands when the doctor delivered the news of my dad's diagnosis and confirmed my worst fears following a couple of months of disturbing symptoms. It was like falling into an abyss. In the blink of an eye, our old life was gone and we were thrust into a new, uncertain chapter.

It was a long journey with my dad going through chemotherapy in the summer of 2017 and whole brain radiotherapy in December 2018. We all did our best to adapt to some pretty complex physical, emotional and mental challenges, and my dad always maintained his sense of humour and positive outlook. The cancer returned for the final time in April 2018 and my dad was admitted to the Cornhill Macmillan Centre in Perth, where he received outstanding care for 11 weeks until his death on the afternoon of 28th June. My mum, brother and I were all at his bedside, holding his hand and talking to him as he peacefully slipped away.

My dad was an inspirational man, both in sickness and in health. He taught Chemistry at Perth High School for 36 years and had a positive influence on the lives of thousands of pupils. He was frequently voted 'teacher of the year' by the school kids and the pinnacle of his long career came in 2010 when he received a national award from the Scottish Qualifications Authority for his superb teaching. Not only was he a brilliant teacher; he was also a wonderful dad, husband, son, friend, colleague and neighbour. He donated his body to science and so continues to make a difference to others, teach and fight cancer. We held a memorial service in Perth on 24th July and were completely overwhelmed by the number of people who came along to pay their respects. I couldn't be more proud of my dad; he was one in a million.

In 2014, I set out on a long walk along the Fife Coastal Path to fundraise while my grandad - my dad's dad - was losing his battle with cancer. It's time to pull on my walking boots again and set off around another peninsula - the Black Isle; my Highland home. My parents always loved coastal walking and they will be in my thoughts every step of the way as I embark on a new adventure in Scotland's great outdoors with my camera.

Fundraising is hugely important to Macmillan. Donating through JustGiving is simple, fast and totally secure, and the money goes directly to the charity.