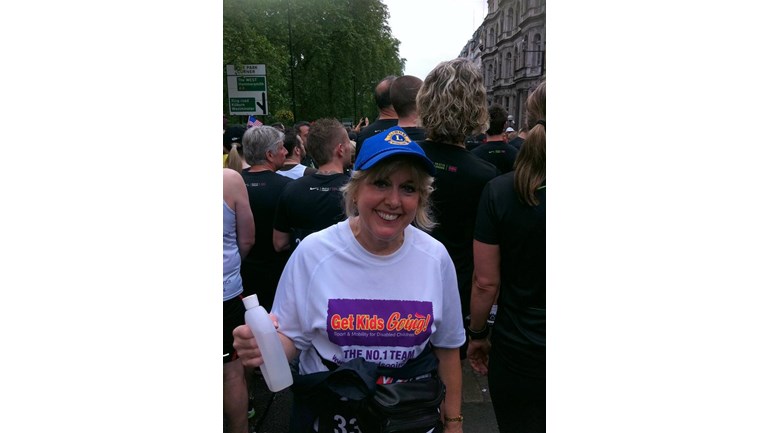 So despite not being a big fan of running, I have decided to get my running shoes on and hit the treadmill to train for the British 10K London on Sunday 13th July to raise awareness and funds for the Transverse Myelitis Society.

My Mum has completed this run 3 times for charity but last August she was taken very ill as a result of this rare neurological condition. After a very severe attack and spending 5 months in hospital and a rehab centre she is now on the road to recovery and slowly but surely, getting stronger and learning to walk again.

Transverse Myelitis is a condition resulting from a mystery virus which attacks the immune system which causes it to attack body tissue which damages the myelin coating that encases the sensory nerves of the spine. The result is that messages stop being effectively transmitted from the brain to the rest of the body and in my Mum's case caused paralysis of the legs and pelvic area. Other symptoms that she and many TM sufferers have to live with everyday are muscle weakness, uncomfortable nerve sensations, neuropathic pain, spasticity, fatigue, depression and bladder and bowel dysfunction.

The Transverse Myelitis (TM) Society have been a great support for my Mum. They are a small UK based charity whose main aim is to offer support to those who may have, or know someone with Transverse Myelitis and it's associated conditions such as ADEM, Neuro Myelitis Optica (NMO) and others. They are manned by an entirely unpaid voluntary group of people who mostly have TM themselves. TM affects roughly three to four people per million patients seen, so those with the condition may simply never meet anyone else with it.

Your donations would be invaluable in helping the Society achieve some of their priorities for 2014 which include some of the following:

You can read more about the condition and the great work the TM Society do at http://www.myelitis.org.uk/ (my Mum is on the front page!)

Thanks for supporting me and the charity that is helping my amazing Mum and many others living with TM.

The TM Society provides information and support to over 2000 people living with Transverse Myelitis, their families and carers in the UK, and those with other rare auto-immune neurological conditions, ADEM and NMO (Devic's disease). It's affiliated with the worldwide Transverse Myelitis Association.