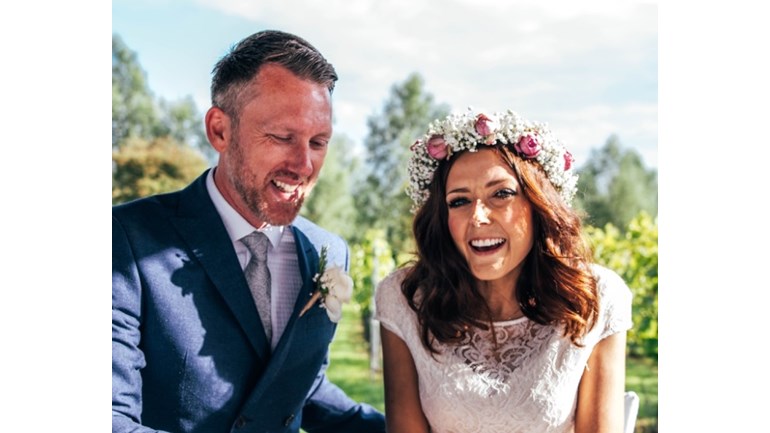 On Sunday August 13th my wife Katie Louise Sutterby died after a short fight with cancer.

It started with some stomach pain in June and her GP suspected nothing more than indigestion at best, gallstones at worst. However the pain became more intense and Katie went to A & E one day to undergo some tests. An ultrasound revealed 'lesions' on Katie's liver and we feared the worst whilst trying not to think about it actually being true. But on 6th July Katie was diagnosed with bowel cancer and it had spread to her liver.

A week later, we met with the consultant oncologist who gave Katie months to live, maybe a year. The cancer was inoperable but chemotherapy was scheduled to buy Katie some time. The shock of the initial diagnosis had just been compounded. For anyone, hearing that news is devastating; for a healthy 29 year old, it's incomprehensible. However, Katie dealt with it remarkably, remained strong and started making plans for the time she had left.

Katie then spent more time in hospital undergoing an operation to help her bowel function. She was finally discharged with an array of medication and we were able to have some sort of normal life for a short while. Unmarried at the time, we got engaged and planned to marry later in the year.

Katie had her first dose of chemotherapy and with few side effects at first, things seemed a little more positive. But Katie began to feel bad again, her stomach becoming more swollen. Then on Aug 1st she went back to her consultant. He could see that Katie had become jaundiced and said that she was too ill to continue with chemotherapy. He reduced her life expectancy to weeks. This crushing blow devastated us all again but Katie carried on, determined to see our wedding plans come to fruition.

We brought the ceremony forward and with a lot of help were married on Aug 9th with an amazing celebration ceremony the day after. A small honeymoon followed but on Saturday on our way home, Katie began to feel her medication wasn't working effectively any more. Her pain intensified and we decided she would feel safer at Farleigh Hospice. They managed to make her comfortable for a while but on Sunday, Katie passed away, peacefully and free of pain.

As I write this it still doesn't seem real. Anyone who knows Katie, knows how full of life she was, how fun, how inspiring. For her not to be here anymore is the cruelest waste of the most beautiful life.

It's not for me to tell anyone how to live their lives, but if anything positive can come out of this unjust tragedy, let it be that all of us live each day to the full, care for each other and appreciate everything and everyone we have around us.

I can't do anything to make this better, but I can help raise awareness about this indiscriminate disease. Katie was responsible for getting me running and together we worked up to my first 5K earlier this year. On October 13th me and Katie's sister Hayley will be running the Royal Parks half marathon. I'd appreciate your help in raising money for a very worthwhile charity in the hope that it might help someone else going through a similar situation to Katie. Please share Katie's story.  Thank you.