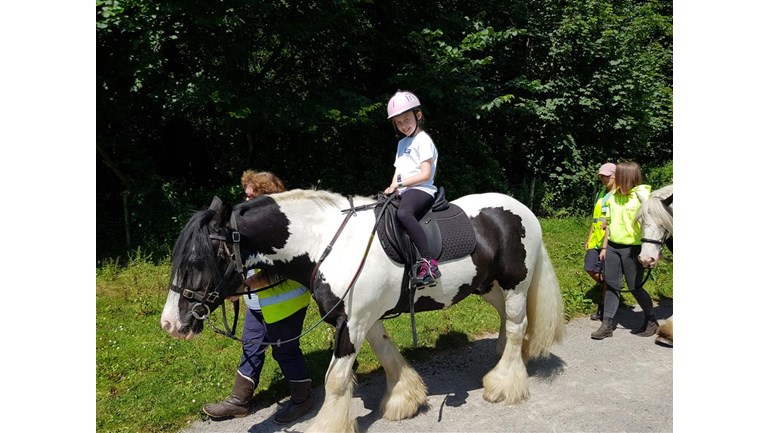 Just a normal day in June 2009, or so we thought. It's amazing how a standard meeting at work can be ingrained in your mind forever more, but that's what happens when important phone calls are received.

"Katie's legs aren't working! She won't stand up! They're just hanging from her waist ..... I'm going to the doctors"

There's always the hope that it's usually something small that the doctors will work out but Lisa had to go the GPs (she's just a lazy baby), the walk in centre (she's just a lazy baby), A&E - admitted through to paediatrics (she's just a lazy baby). It's amazing how shouting "No she's not" can get the attention of a consultant who overhears and is actually interested in a challenge (and still keeps in touch 10 years later :) ). 1 MRI (mutterings of being too complex) and a digital upload to John Radcliffe quickly results in an ambulance transfer. Another MRI this time with contrast and straight onto IV steroids. 24-48 hours from start to diagnosis:

"Well it's good news that it's not in her brain"

"Hang on, whoa rewind." This was our introduction to TM and the world of neurology. Thankfully I've had much more informative sessions since then. Katie spent 10 days at JR in which time she received a treatment called Immunoglobulin or IVIG. There are plenty of positive stories to be read about this treatment, but due to it's sudden sporadic requirement and TM's rarity, it's difficult to document and prove for TM and related conditions. The high cost means it continues to be a battle for budgets. I know in my heart who I'm thanking for the fact that Katie walked out of there 10 days later.

TM rarely disappears completely and traditionally there is a 33/33/33 approach to patients. Those who remain disabled, those who are left with a disability but improved from the time of attack and those who return to their pre TM ability. Katie 'looks normal' but has to deal with the world of bowel and bladder control, orthotics to control feet and leg development as she grows, daily medication, a wonderful world of pins and needles and booking up sleep time for extra activities.

No-one yet has a definitive answer for why TM happens, but models have been documented so much to say that if 3 or 4 things come together then a TM attack might happen. For example, the body may be hosting a bug at the same time as receiving an immunisation and then throw a virus in the mix. The immune system ramps up too much to kill the invader and follows on by damaging the myelin sheath surrounding the spinal cord. Pressure grows in the area of attack, squashing the surrounding nerves. Onset can drag on a few days or in Katie's case quite immediate. If recognised quickly enough, the IV Steroids is the 'go-to' method for reducing that swelling and resurrecting nerve function.

Fast forward a few years and I made contact with the Transverse Myelitis Society. They are a volunteer based charity providing a community for patients with TM and related conditions. Soon after joining and in 2015, the first Transverse Myelitis Society Family Weekend took place at the Calvert Trust in the Lake District. We were lucky to attend and for Katie this was fantastic to meet others with TM. The Family Weekend provides a setting for structured activities for all abilities and time is shared for discussion with medical professionals. Such a hit that it was repeated in 2016, 2017, 2018 & 2019! for which myself and another parent joined the organising team to share the workload. The benefits are huge for families who have never met others with similar conditions and all of this costs money, with a budget exceeding £30K for ~70 people. Each year, new families make contact with the TM Society and it's hugely satisfying to continue the development of the Family Weekend. For those families to have great fun for the weekend, meet other families, discuss amongst themselves or with the medical professionals and not to feel alone anymore with a rare condition.

I am bringing my love of cycling together with the work I've been doing for the TM Society Family Weekend and challenging myself to cycle from Land's End to John O'Groats. Not quite crazy enough to do it on my own I've chosen to take part in the Deloitte Ride Across Britain in September 2019. It is 980 miles over 9 days, staying in tents each night. I completed this challenge in September 2017 so I know roughly what's in store for me, but the training miles haven't comes easily this year and the Scottish route has changed to include Glenshee and The Lecht for a challenging day 7 & 8.

I'd be delighted if you could sponsor me for the Ride Across Britain with proceeds going to the Transverse Myelitis Society.

The TM Society provides information and support to over 2000 people living with Transverse Myelitis, their families and carers in the UK, and those with other rare auto-immune neurological conditions, ADEM and NMO (Devic's disease). It's affiliated with the worldwide Transverse Myelitis Association.

Charity Registration No. 1108179
Find out more about charity fundraising