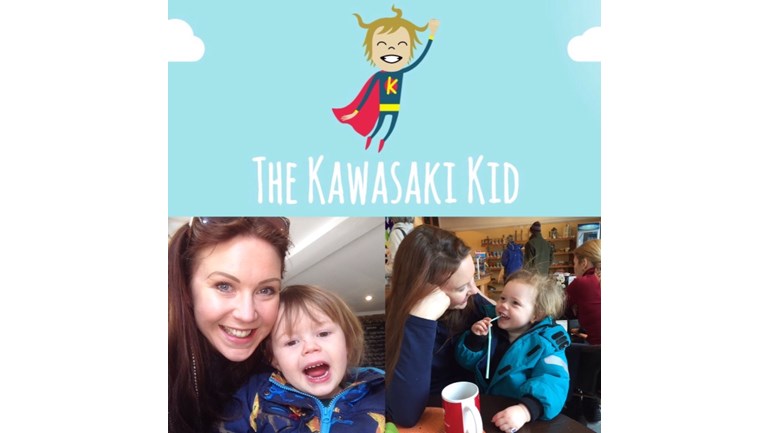 Fundraising for Societi, The UK Foundation for Kawasaki Disease

The Kawasaki Kid is a superhero based on my son Stanley. He has fire in his belly and spirit in his heart. Only a couple of months ago our world stopped when Stanley was diagnosed with Kawasaki Disease - he now lives with two giant aneurysms in his coronary artery and requires life long cardiac care. We want to make this little known disease known and raise vital funds for research, so other children and families do not suffer in the same way and that is why I have taken on this epic challenge of running 100k.

Kawasaki Disease is a vascular disease mainly affecting young children, which if untreated can cause coronary artery damage.  If treated early however, the majority of children recover well.

What started out as what we thought was another normal childhood disease led to our little boy spending four days in intensive care at the Royal Brompton and a further six days in St Mary’s hospital because of a disease that shares its name with a motorbike; Kawasaki disease. If diagnosed early the damage is minor and children recover without any lasting complications. However, because this disease is so unknown, if left untreated for a period of time or mis-diagnosed severe long lasting damage can be done, inflaming all the arteries as it makes its way to the heart. In our poor little Stanley’s case it has resulted in him having two giant aneurysms in his coronary artery and he will need life-long cardiac care.

Kawasaki disease looks like any other childhood disease and often starts out what looks like fever. We were told three times by our GP that it was nothing to worry about and to come back if there was no improvement in 3 – 5 days. Even when we went to the local hospital they still were not sure of what was the matter with Stanley and we were discharged after spending six days on antibiotics as he was starting to make small improvements. Kawasaki was mentioned a few times but the doctors were not convinced and we were discharged but asked to attend an appointment at the Royal Brompton the following week. Thank goodness we had this appointment.

After an echo at the Royal Brompton things got very scary very quickly and instantly Stanley was emitted to the Paediatric Intensive Care Unit (PICU). After further investigation the cardiac specialists revealed he had two giant aneurysms and believed there was a clot.

It was the most frightening time of our lives, but it feels like the journey has just begun. To look at him you wouldn’t know what is going on inside his little body. He has two aneurisms that may or may not reduce in size – we just have to wait and see. He has had some awful things done to him that no one should have to endure. He will be on blood thinners for the rest of his life and monitored every week by cardiologists at the Royal Brompton for the first 8 weeks then every month in his childhood.

Every-day, twice a day we now have to inject our son for the foreseeable future, along with giving him three other types of oral medications. Every time I have to put the needle into my crying child, my heart breaks. And over his tears I just say I love you, I love you, I’m sorry, I’m sorry. This is your lifeline little boy, this is keeping you alive.

A lot has changed for us as a family now. I have to rely on other people a lot more. We have a lot of appointments. We have to ensure Stanley is well and having his medication. As he gets older we are told he won’t be able to play football, rugby and do a few other things. But this won’t define Stanley, this won’t stop him. Watch my baby soar, because the universe has a plan for him – he is destined for great things.

We will get used to injecting our son and Stanley’s tears will start to fade as he starts to get used to the feeling of the needle piercing his skin. My heart will still break but I will be fighting like a warrior to make sure he has a normal life and to raise awareness of this horrible disease in the hope that one less child will have to suffer the way Stanley has.

I will not sit back and let this be the unknown childhood disease that no one has heard of, that doctors and nurses know little or anything about. It is becoming more and more common in children in the UK. So much is unexplained about Kawasaki…… It is a mystery and I want to help raise awareness and funds for research.

We have created the Kawasaki Kid, a character based on Stanley. He is a superhero, and like Stanley he has spirit in his heart and fire in his belly. He will be spreading the word of Kawasaki.

Kawasaki disease is the leading cause of acquired heart disease in children in the UK and the western world. It's time we changed that. We have an enormous task to do. But we are going to do it. TOGETHER we will. Join us and help us protect tiny hearts. You can make a difference. Awareness of this often pernicious disease is currently poor. Slow diagnosis and delayed treatment of Kawasaki Disease can cause serious, life-long health issues. Children affected by Kawasaki Disease have excellent chances of a good recovery with timely diagnosis and the correct treatment. At Societi we know that recognising Kawasaki Disease early is THE transformational opportunity to prevent what can be devastating effects from Kawasaki Disease. Kawasaki Disease has lots of symptoms in common with other childhood illnesses so it is often misdiagnosed - this means lifelong heart damage for too many children. Each year in the UK there are more cases of Kawasaki Disease than bacterial meningitis! Everyone would spot meningitis and know what to do, because of brilliant awareness raising work by MRT. We need everyone to recognise Kawasaki Disease too.

Charity Registration No. 1173755
Find out more about charity fundraising