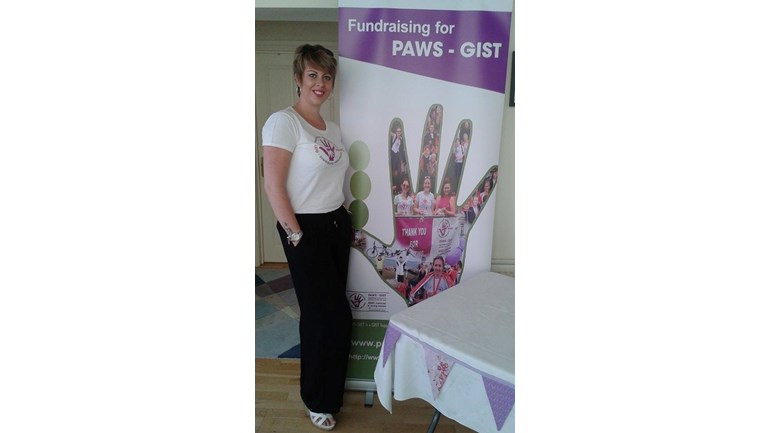 Raising funds for PAWS-GIST for GIST Support UK because we need to improve treatment & find the cure.

On 17th of May 2016 I walked out of Addenbrookes hospital broken, my whole world shattered. I had just been told I have a rare cancer called GIST...

27th January I went for a routine check-up for a repeat prescription of my contraceptive pill some 3 months prior to my diagnosis, little did I know a new chapter of my life was about to begin.

The nurse told me my blood pressure was high. That made me chuckle “of course it's high”  I thought. "I work in a predominately male environment" and me being a Stent I give as good as I get. On advice from the nurse on 1st February I went to see my GP feeling bad about wasting NHS time. My GP sent me for routine bloods and
then life carried on as normal.

16th February and a follow up appointment came. Once again I was sat waiting to see my GP, who informed me that my iron levels were extremely low making me severely anaemic. "Great!" I thought, just as I am about to hit my busiest period at work. The GP explained she was concerned as haemoglobin levels this low could indicate an internal bleed. Now, I started to pay attention. We talked about possible causes and I explained I had suffered with tummy pain and discomfort for many months but I put it down to just a bit of stress. On 25th February I was sent for an ultrasound scan for further investigation.

Three days later… My GP’s telephone number flashed up on my mobile and my heart skipped a beat. I listened to what she had to say, put the phone down and began pacing the office. Life became surreal at that point. My doctor had called to tell me I had a mass on my liver and she needed to inform me I would receive a letter booking me in for a CT scan but I had to be aware they were looking at cancer. I called my dad and cried. I cried a lot.

The CT scan conducted on the 11th March was inconclusive.

Then on 20th March came a MRI scan and days of waiting, being passed from one department to another. Until I ended up in upper GI (Gastro intestinal.) No- one knew what to do with me. Fabulous!

On 26th March an Endoscopy and biopsy were scheduled and I was starting to get fed up with doctors and hospitals. I was scared about what was happening and no one could answer my questions. The biopsies came back inconclusive but they had noticed six growths within my stomach and needed to take a closer look.

My world continued to crumble. For the first time ever I saw my Daddy cry.

After four weeks of waiting I was referred to Addenbrookes and on 27th April another Endoscopy with Ultra Sound and tissue biopsy were performed. The Doctor told me he was very good at his job. One of the best in his field. (It took him half an hour to find a vein for my Cannula!) True to his word he got his diagnosis. Little did I know at this point that I
was indeed with some of the best consultants in their field.

Finally the clinic appointment arrived on 17th May… ONCOLOGY!

I made the dreaded journey to Addenbrookes to see Dr Bulusu and get my diagnosis. Sitting in the waiting room surrounded by seriously poorly people I thought '"This isn't me. I'm young. I'm healthy. This isn't me."  My name was called. Mum and I walked through the long winding corridor to a small yellow room, where we sat and waited, both aware life may be about to change.

Dr Bulusu entered the room all smiles and  explained who he was, and what his role was within the hospital. For the next 1 hour 40 minutes he talked to us about GIST, a rare sarcoma, which is a cancer of the soft tissues within the Gastro Intestinal Tract. Due to my age he was 99% sure that I had an even rarer form called PAWS-GIST. (Paediatric Adolescent Wild type Gastro Intestinal Stromal Tumour). GIST does not respond to Chemotherapy or Radiotherapy.  GIST is treated with Imatinib or surgery.

Unfortunately, PAWS- GIST does not respond to the drug used for adult GIST and relatively little is known about what causes it. Therefore at this moment in time there is no effective drug for PAWS-GIST.

On 27th May a PET Scan was booked to look for further spread. A week later on 2nd June I was back at Addenbrookes with James, Mum and Dad to be told I have secondary GIST in my liver. During the consultation I found out I am NOT a candidate for surgery at this point in time as the tumours are too close to connecting blood vessels. PAWS-GIST is turning out to be a right bitch!

I still haven't come to terms with my diagnosis and I don't think I will for a while, but every day is a new challenge, a rollercoaster ride of feelings and emotions and every day is a new page to my story. I couldn't have got through these last few months without my amazing strong family, and terrific network of friends.

This is me now.