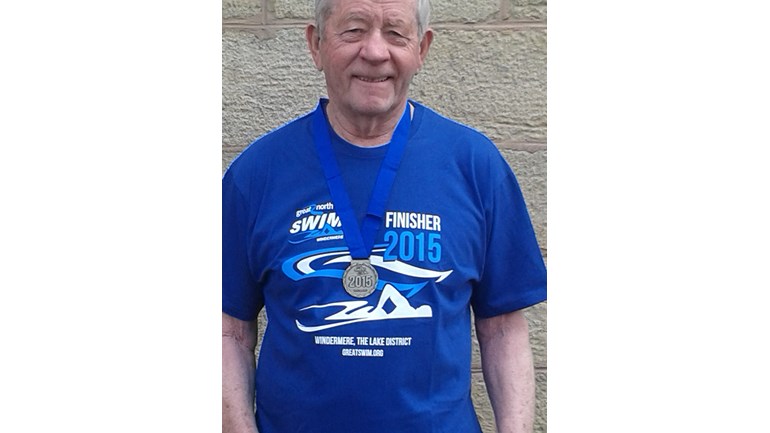 Once more into the breach three miles of Lake Windermere. Now at the age of eighty I am doing it for the second time.

Ken Heathcote, a coal miner’s son from a Northern council estate, became one of the most influential men in the fitness industry – a pioneering visionary who transformed Britain’s health culture and helped a Premier League soccer team overcome its players’ psychological problems.

The former paratrooper launched the country’s first multi-facility fitness club in his home town of Bolton, and for 30 years was involved with more than 100,000 people – local folk who simply wanted to get fit, but also dozens of sporting household names.

At one point, Ken was training more than thirty people, aged over 40, who were running marathons in under three hours. He coached a cerebal palsy victim, who won six Gold Medals at the Paralympic Games in New York.

And, as a Mister Universe judge, he met Arnold Schwarzanegger, who told him he would one day be a Governor of California!

For his 40th birthday, Ken raised money for a leukaemia charity by: Running 40 miles before breakfast…Lifting 40,000 lbs, in a series of exercises, in 40 minutes…Playing four, best of five, squash matches against the world squash champion, two England footballers, and a disc jockey… Performing 400 sit-ups.

Six years later, Ken achieved national acclaim when BBC TV filmed him trying to break the Land’s End to John o’ Groatsrecord by running the 841 miles in under 11 days. He managed 559 miles in nine days before a damaged Achilles tendon forced him to quit.

In 2010, Ken flew to Switzerland with son Paul – the famous chef, recently awarded an MBE – to climb the Matterhorn.

Ken’s mental and physical strength is awesome, but it is his philosophy on what makes the human mind – and body – tick that sets him apart from most fitness gurus.