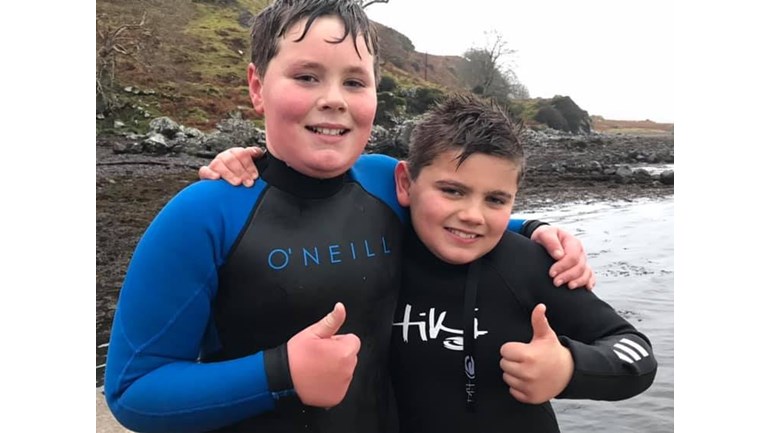 The boys (age 9) SWAM 900m ACROSS THE SOUND!!! for Kerrera Old School Community Centre because they want to improve island life!

Starting in the water about 8.20am, on a typical grey December day, determined islanders Eachann and Olly totally powered through the water with their mums Sheila and Gill- making them the youngest to ever swim the Sound of Kerrera!!!! With Eachann's dad Corrie in a rib and Olly's dad Tim on a SUP, the team made great progress.The tide however meant they drifted, so the swim went in a horseshoe, making the total distance covered more like 900m! There was a great turnout to support them- with their younger brothers Rory and Struan, some family, friends and reporters from the Oban Times travelling alongside on the ferry. Islanders gathered on Kerrera- amazed with their achievement and shouting and cheering them on. In a rare show of emotion, proud grandad Donald McGregor choked up and called them 'my heroes'. Support for this epic sponsored swim all in aid of our first island community centre has been overwhelming- a HUGE THANK YOU to all who've donated, we can't tell you how much it means!!! And... a huge and heartfelt thank you to these courageous and passionate boys- Olly and and Eachann, you are truly inspirational!!!

Yes, it's cold and it will be difficult... and the island boys are up for the challenge! Aged 9, Olly and Eachann aim to be the youngest swimmers to ever cross the Sound of Kerrera. On 7th December 2019 (weather dependent), they plan to swim from the mainland 600m across open sea to their island home, all in support of the big community project- to create a new island community centre.

They have been practising a lot, helped by their mums and dads- Gill, Tim, Sheila and Corrie, who will be with them on the day, swimming alongside in the water and in support boats. It's a tremendous challenge (for any swimmer!) and local islanders are already incredibly proud of them for their willingness to literally jump in.

In July this year, islanders (68 in total) bought the old primary school building on the island, and now they are working hard to fund-raise for the renovations. With no facilities on the island and the last public ferry at 6pm, there is currently very limited opportunities to socialise, or take part in any classes or events of any kind. Everyone is doing their bit to turn the old building into a new multipurpose community facility- please show your support for these incredibly brave boys and donate!

Olly has been dreaming of raising £100... we hope we can smash this target... fingers crossed...Thank you :) x

Kerrera is a rugged wee gem, lying off the coast of Oban in the west of Scotland. The Isle of Kerrera Development Trust represents the small but vibrant community of 68, including 19 children. We initiate and develop projects that will benefit the island, its community and its visitors.

Charity Registration No. SC040372
Find out more about charity fundraising