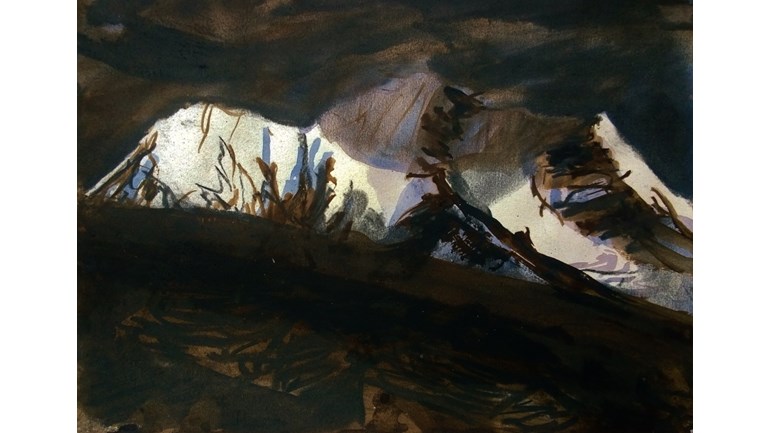 The devistating 2015, 7.8 magnitude earthquake for Community Action Nepal because I travelled to the valley before the earthquake

An artists journey into the Langtang Valley, Nepal.

Nepal is a poor, third world country blessed and cursed at the same time
and certainly provides an inspirational but often challenging travel
experience.

A journey into a remote mountainous area always throws up challenges, which
is part of the fun in going in the first place. The beautiful, high mountain
valleys and fantastic folk  of Nepal are
no exception to that rule.

The images in this blog are all original artwork, either sketch drawings,
photographs or digital paintings produced on an IPad using a Paper53
application. The images and supporting text tell my story of my journey into the
heart of the Langtang Valley before the devastating 2015 earthquake which
changed this valley forever and took so many lives.

In some ways the images are a record of the valley before it changed
forever. Many of the places, valleys and even the mountains themselves have
been changed dramatically by elemental violence on a scale that is hard to
imagine.

The purpose of this body of work is to continue my financial support of Community
Action Nepal, a British NGO charity who works tirelessly to support communities
across Nepal, particularly needed after the 2015 disaster.’  Just after the earthquake I was able to raise
several thousands of pounds for the charity, by auctioning off limited edition prints
of the the original ‘sketchbook journal’ images which I’d produced during my
visit to the Langtang Valley. My hope for these images when they are printed
and exhibited that sales of the work will create further funding for the
charity to help it continue its important good work.

The new colour ‘paintings’ – in inverted commas because no paint was used
in making them were made digitally using a computer. This fact, I believe does
not make them a lesser form of fine art, indeed I’m convinced that direct image
making using a computer is going to be a common fine art process of the future.

Internationally famous visual artist David Hockney is a major proponent of
this process of image making. His recent ‘Landscapes” exhibition at the London
Royal Academy demonstrated to me the potential of direct image making using a
computer and a digital stylus pencil has. The artist tools and the colour
palette of the image manipulation programmes are vast and getting better every
day. As an artist I can move quickly between colour, tools and effects. I can
experiment without fear of mistake, I can explore my visual ideas and then I
can share them quickly and widely.

The criticism of this method of making original art, reminds me of the
arguments made against photography being a fine art in the early twentieth
century. We all now accept that good photography can be fine art. My argument
is that the processes used to make a fine art photograph are exactly the same processes
as making a direct image on a computer. Like the fine art photographer the
painter gathers together the raw reference materials and manipulates these
references to produce a unique visual perspective.

The fact that an image can be reproduced over and over again exactly the
same, for some means that both photography and direct image making on a
computer can never be fine art. That in my opinion totally misses the point.
The point being it’s not how many images you make, it’s the quality and
originality of the image and how it was made, that for me defines whether it is
fine art or not. Clearly, the best photography and direct image making on a
computer involves a creative process that by the very methods employed to
produce the final image makes these images an example of fine art.

As the door of the plane swings open at Kathmandu airport you instantly
know you’ve arrived somewhere different. Different sounds, smells and tastes,
the immediate hustle and bustle of one of the most polluted mega cities wraps
around you instantly. You have no choice but to dive in and embrace the
experience, always wary of the pollution, the crazy traffic and the
overcrowding. Kathmandu is a paradox. On one hand it is a massively important
world city with its 7 ‘World Heritage’ sites, vibrant, teeming with life,
creativity and colour. On the other hand it is a filthy, overcrowded,
ramshackle mess of a place, dangerous and disturbing. It is not a surprise it’s
like this since just 40 years ago it had a population of less than 104,000 but
now is a city of over 1.5 million. Built in a steep sided valley there seems no
rational or conceived urban planning, resulting in a sprawl of poorly built
concrete constructions of all shapes and sizes and pollution from the millions
of cars, motorbikes and ‘Tuc Tucs’ competing for space, ever noisily on
inadequate roads. I like Kathmandu but I like even more getting out of
Kathmandu without picking up a chest infection

Langtang Valley is regarded as one of the most accessible mountain trek
valleys of Nepal. It takes only a full days drive into the mountains on
increasingly bad and precipitous roads to reach the road head and the starting
point for the trek. As such it attracts a lot of visitors. I’ve travelled in
much more remote areas particularly in the north west Himalayas so seeing so
many westerners doing ‘the trek’ for me depleted the experience somewhat.
However what the crowds of trekkers took away was more than made up by the
quality of the landscape we were passing through and the good nature, smiles
and welcome from the locals which was consistently given.

Another positive of demand to visit this area meant the infrastructure to
support a trek up the valley was readily available. We picked up a team of
porters with ease. On the trail campsites and tea houses were abundant. In this
context a Langtang trek is an ideal ‘first trek’ for those that want to
experience a Himalayan mountain journey without the protracted difficulties and
higher costs of travelling in more remote areas.

Our objective was not ambitious. We planned to go as far as the last
village, Kyagin Gompa in the valley, put up a higher camp to acclimatise then
climb a trekking peak called Kyaagin Ri. Although not a technical challenge at 4773m
/ 15665 feet it would prove to be as usual, a lung draining climb.

The journey begins in the steep sided valley, densely forested following
the line of the torrential river, weaving its way ever upward, crossing the
river back and forward over ramshackle bridges. Our Porter team were well used
to the trail and took great pride in ensuring in their opinion that we had the
best campsites, the best Tea House accommodations and what they believed we as
westerners wanted to eat. Food was always ready for us, but it took a full week
before we convinced our team that Spam was not our staple diet and that we were
quite happy to eat Dahl Bhlat like the locals.

It took us five days of trekking at a pretty steady pace to reach the last
village. We rested here for a couple of days before putting a higher camp in.
We managed to climb Sirgi Ri but unfortunately our second higher peak Merla Peak
was unsuccesful because winter arrived early. This was not a trip for ‘an epic’

The photographs and artwork gathered on this trip gained more significance
because of the 2015, 7.8 magnitude earthquake. This landscape is now different
to these images, they are a record of what was, was before it all changed
forever. Langtang Valley was particularly badly hit with a reported 300 plus people
killed. The main settlement Langtang village was completely buried when the
hillside behind village poured down burying the entire village to a depth in
some spots 400 feet deep. People here had no chance.

The impetuous now is reconstruction and to encourage people to return to
the Langtang and other Himalayan valleys. The people who live here depend on
the income this tourism brings. I support the work of Community Action Nepal
who get money raised effectively to aid sustainable reconstruction. All the
images on this blog are downloadable and offered to you free of charge. However
I ask if you download one of my images you make a donation to my JustGiving
Page: www.justgiving.com/langtangart. All donations will go to the
Charity.

Five years after the devastating earthquakes CAN's reconstruction work is complete. JustGiving fund raisers were magnificent - their support raised over one million pounds. CAN is now concentrating on remote areas of North Gorkha & funding is needed for health and education provision.

Charity Registration No. 1067772
Find out more about charity fundraising